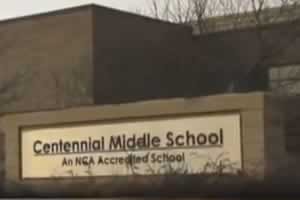 South Lyon, MI - The South Lyon Community School District is defending its decision to suspend a teacher for allowing a student to play a gay-supportive song in her classroom.

Susan Johnson allowed a student in her performing arts class to play Seattle-based rapper Macklemore's single Same Love from the upcoming album The Heist. The song, which features singer Mary Lambert, follows the life of a gay man and the life he built with his partner.

Johnson said she asked the student whether the song included profanity or violence before allowing him to play it for the class.

Johnson received a three-day suspension, two of which will not be paid.

According to The Detroit News, the district stood by its decision in a statement released Friday.

"The district has an established practice, included in the staff handbook, that requires the instructor to first preview any taped material to be used in the classroom, including YouTube clips, then submit a completed form about the proposed clip to a building administrator for approval," the district said.

"To ensure that the proposed material supports the curriculum for the class, the form requires the instructor to provide a brief description of the clip and how it relates to the lesson plan.

"Further, the instructor is to identify the curriculum benchmarks that students will complete as a result of watching the clip. The employee neither previewed the YouTube clip, nor submitted the form for approval as required. Instead, a student gave the clip to the employee at the beginning of class and the employee showed the clip to the class. The clip had no relationship whatsoever to the instructional class content planned for that day. The purpose of this established practice is to ensure that instructional materials are appropriate for the course and its students. It is because we care about all students that we have this procedure in place."

Macklemore responded to the incident in a statement: "This level of intolerance and fear is still very active in America, but at times is not completely visible."

Same Love, he added, was "written with the hope that it would facilitate dialogue and through those conversations understanding and empathy would emerge. This incident demonstrates how too often we are quick to silence conversations that must be had."