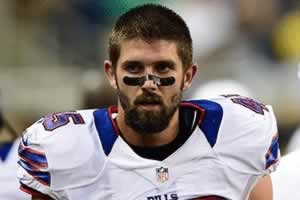 Chicago, IL - The Cleveland Browns organization has repudiated linebacker Ricky "Tank" Carder, Jr.'s use of a gay slur on Twitter.

The 23-year-old Carder apologized on Tuesday for tweeting "your a faggot for that" to a follower but not before defending himself.

When Because I'm a Guy tweeted, "Trying to betray all your teammates as soon as the game ends" last week, Carder responded: "@causewereguys unfollowed... your a faggot for that." (This tweet has since been deleted.)

One follower attempted to intervene, "@tankcarder I think he means in Call of Duty Tank."

"@CoachSavino yea they all getting butt hurt, and they are just chiming in," Carder tweeted on Monday. "Preciate it bro!"

"@craigcraiglife I don't agree with being gay or lesbian at all, but saying faggot doesn't make me a homophobe, it's just a word."

After tweeting, "Stay unapologetically strong," Carder messaged a non-apology: "If I offended in anyway, I do apologize, thought the guy was bashing team sports, big misunderstanding."

On Tuesday, he added, "I want to sincerely apologize for the word I used! I did not in anyway mean to offend anyone! That tweet doesn't define me as a person!" and "I was not bashing the gay community in any way ... if you knew me you would know I wouldn't do that. Again I'm sorry if you were offended."
The Browns organization distanced itself from Carder's message in a statement.

"These comments are certainly not reflective of the Cleveland Browns organization, nor do we condone them in any fashion. We have spoken with Tank and have made this very clear to him."

In an open letter to Carder, a Texas Christian University (TCU) alum, published on Outsports.com, former TCU linebacker Vince Pryor said he was "disappointed in the lack of understanding you've shown in the effect your words can have on young athletes who consider you a role model."

"As a public figure and a representative of both TCU and the NFL, your words have power, especially for young athletes who happen to be gay," Pryor wrote. "When I was an athlete at TCU, I lived in fear for many years over what would happen if my coaches or teammates learned that I was gay."