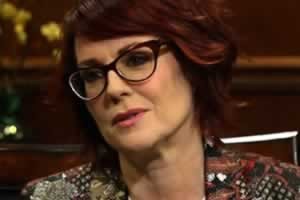 Megan Mullally, who is best known for playing Karen Walker on NBC's Will & Grace, has said Eric McCormack almost passed on Will & Grace because he didn't want to play gay.

In an interview with Larry King, Mullally also said she believes the show could have lasted another two seasons and revealed that her favorite episode was the show's series finale.

"The scene that was very hard to get through was the scene that Sean Hayes and I had together where we ... he played piano and I sang the song Unforgettable and it was," she paused, then added, "not a dry eye in the house."

Mullally said all four of the show's main characters originally passed on Will & Grace.

"Debra Messing was tired because she had just done two series back to back and she wanted a break. Eric McCormack had been playing a manly cowboy on a series in Canada and he didn't want to play gay. And I can't remember what Sean's thing was. And then, I had read the script and thought it was quite a lot like Christine Baranski's role on the series Cybill, which had just been on right before Will & Grace started. ... "