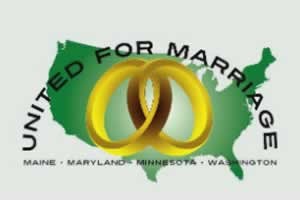 A new group announced on Thursday will work to put more supporters in the four states with gay marriage referendums.

"There's no doubt in our minds that this year is a turning point," Jay Cash, national campaign director for United for Marriage, said in a statement. "Americans overwhelmingly want to stop shutting same-sex couples out of marriage. We know that the best antidotes to the inevitable anti-gay attacks are real stories about why marriage matters to same-sex couples and their families. Through this effort, we'll significantly grow the number of people who can tell their stories in these four states."

This fall, voters in Minnesota will decide on a constitutional amendment which aims to ban gay marriage in the state, while Maryland and Washington state voters are being asked to uphold – or reject – laws legalizing such unions approved by lawmakers. Maine voters will decide whether to legalize gay nuptials in the state. If approved, it would become the first state to do so at the ballot box.

United for Marriage will ask supporters to donate a week's worth of time in one of the four states. A second initiative will place volunteers in states near them for a weekend.