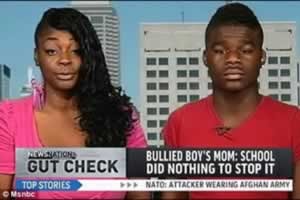 The suit was filed Friday in federal court in Indianapolis.

Administrators at Arsenal Technical High School expelled Young in the spring for bringing a stun gun to school. Young, 17, said he used the stun gun to scare away bullies.

According to a statement released by the National Center for Lesbian Rights (NCLR), which is representing Young, the student faced "severe and relentless harassment" throughout the 2011-2012 school year.

"[I]mmediately after beginning classes at Tech High School, he encountered constant abuse from students who harassed and threatened him because of his gender nonconformity and perceived sexual orientation. Students called Dynasty a 'fag,' spat at him and threw rocks and glass bottles at him."

Tech Principle Larry Yarrell blamed Young for instigating the harassment when Young and his mother reported it.

"If you wear female apparel, then kids are kids and they're going to say whatever it is that they want to say," Yarrell told the Indianapolis Star.

On April 16, 2012, Young used the stun gun, which emits a loud noise and a weak electric charge, to defend himself as six students prepared to attack him. The noise frightened the students and they fled. The incident led to Young's expulsion.

"It is outrageous that school officials who were entrusted with their students' safety and education blamed Dynasty for the abuse he suffered, and eventually expelled him from school, instead of accepting their responsibility to protect him from harm," said NCLR senior staff attorney Christopher F. Stoll.

"I want to make sure no other student in the Indianapolis Public Schools ever has to go through the kind of abuse that I went through," said Dynasty. "I am hoping this will get IPS to start treating kids like me with respect and really do something to protect their students."