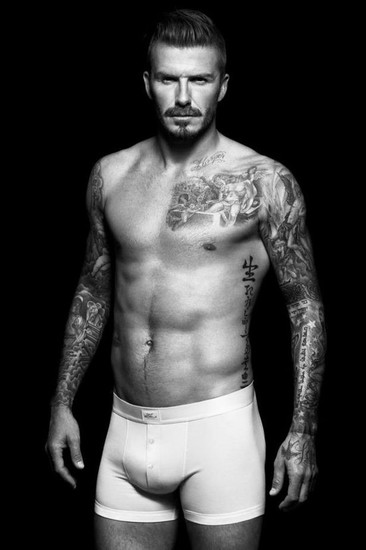 "Hey everyone, here are a few shots from my new Bodywear range for H&M," he said. "Hope you like them."

The photos were shot by acclaimed photographer Alasdair McLellan in Los Angeles.

H&M will celebrate the launch of the second advertising campaign for Beckham's collection by unveiling nine 11-foot statues of Beckman wearing nothing more than his H&M boxer briefs in New York, Los Angeles and San Francisco. The statues arrive Thursday, August 16.

Customers viewing the statue will be able to win a few cool prizes and giveaways. Snap a photo on Instagram with the Beckham statue anytime from August 16 through August 19, and tag it with #HMBeckham for a chance to win one of 100 mini, limited edition David Beckham statues; one of ten pairs of signed David Beckham underwear; and the grand prize which includes $1,000 H&M shopping spree.

Those who cannot make it to the statue sites will have a second chance to take a picture with Beckham from August 20 to August 31 at H&M store locations throughout the country. Those locations have yet to be announced. H&M fans can also follow @HMUSA on Twitter and visit HMBeckham.com for more details.

The Beckham Bodywear collection will be stocked in H&M stores nationwide and online from August 23 with new pieces added in November.