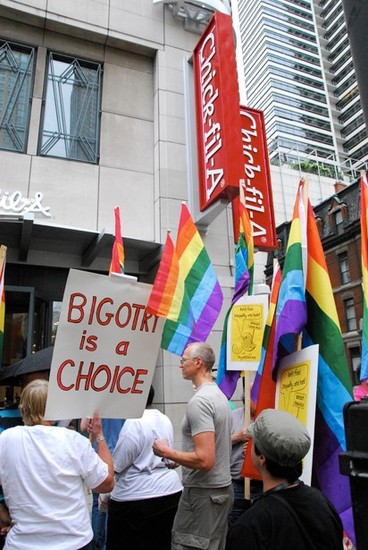 Gay rights activists and protestors from the other side of the marriage equality debate gathered at 4:30 p.m. at the Chicago location, 30 E. Chicago.

The Atlanta-based fast food chain came under intense fire by gay rights groups after President Dan Cathy admitted to being anti-gay during an interview published in the Baptist Press on July 16.

The controversy took center stage in Chicago when Alderman Joe Moreno, a vocal supporter of LGBT rights, said he would block plans to open a Chick-fil-A restaurant in his Northwest Side ward.

Andy Thayer of the Gay Liberation, the group which initiated Wednesday's protest, contends it would be illegal censorship for the government to prevent a business from operating based solely on its leaders' statements.

However, Thayer said there is evidence that Chick-fil-A may be in violation of "bedrock civil rights principles" that should prevent it from operating.

The Windy City Times reported in February 2011 that Chick-fil-A founder "Truett Cathy is quoted as openly admitting he prefers married employees, 'believing they are more industrious and productive' [and] anyone who applies for an operator license is asked to "disclose marital status, number of dependents and involvement in 'community, civic, social, church and/or professional organizations.'"

Thayer said the corporate culture could be interpreted as constituting a hostile working environment against LGBT employees.

As gay rights activists protested during rush hour, they were meet with opponents from Americans for Truth About Homosexuals (AFTAH), an organization lead by Peter LaBarbera and classified as a 'hate group' by the Southern Poverty Law Center.

Wednesday's protest followed a kiss-in by gay rights advocates and allies last Friday outside Chick-Fil-A's more than 1,600 outlets, including the Chicago location.

View more photos of the protest by the Windy City Times