Greg Louganis: Easier for individual Olympians to come out gay 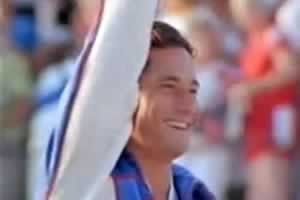 Greg Louganis, who won four Olympic gold medals in diving, believes it's easier for Olympians competing in an individual sport to come out gay.

Greg Louganis told gay blog Outsports.com that many athletes are reluctant to come out of The Closet.

"All I can do is relate to my own journey," said Louganis, who came out gay after retiring. "I was out to my friends and my family. It was just my policy not to discuss my sexuality to members of the media. I wanted my participation in the sport to be about the sport. I didn't want it to be about being the gay diver."

"Today, we have more positive images in media when it comes to sexuality and representation – we're just regular people – so I think it's a more positive atmosphere. When I was on my book tour in '95, I had a lot of people come up to me and say they were gay and they weren't out and they were in a team sport. It's tough if you're in a team sport, because you're relying on your team. I think it's a little easier when you're talking about an individual sport because it's just you out there and you're pretty self-reliant."

Matthew Mitcham came out before competing in 2008, while Megan Rapinoe only recently discussed her sexual orientation.