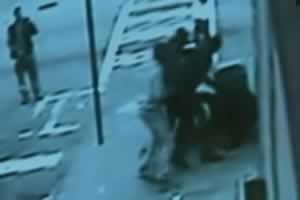 Atlanta, GA - Three young men have been sentenced to five years in prison for the beating of Brandon White, a gay man, on an Atlanta street corner.

The men allegedly beat 20-year-old White on February 4 outside a southwest Atlanta store. The beating was captured on video and posted online. In the video, the men can be heard shouting anti-gay slurs at White as passersby look on.

According to The Atlanta Journal-Constitution, Dorian Moragne, Dareal Demare Williams and Christopher Cain were sentenced on Friday. Each also received five years of probation. A fourth suspect, Javaris Bradford, who allegedly taped the beating, remains at large.

"Y'all are the ultimate bullies, and you bullied somebody and you hurt him," Fulton County Superior Judge Jackson Bedford told the young men. "To me there is no question you did it because of his sexual orientation."

Williams told the judge that he was disappointed in himself because "I know better and know right from wrong."

White had called his attackers "monsters."

"I feel as though I should have justice," White said during a press conference, "because those guys didn't feel my pain. They didn't care whether or not I was injured. I could have died that day. They're monsters."

Congressman John Lewis was among those who rallied to White's side in the days following the beating. He spoke out against crime at a rally in support of White: "When you see something going wrong, you must do what you are doing today."