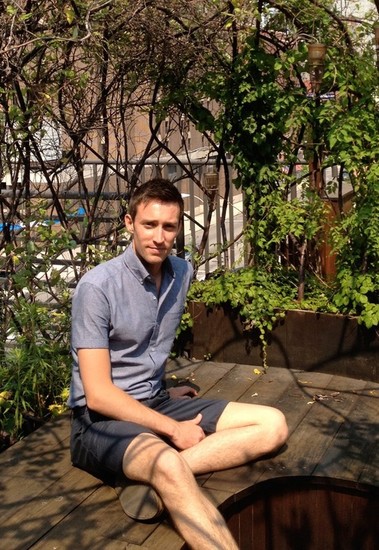 Chicago, IL - Despite claiming he is "no cyclist," this weekend's Ride for AIDS Chicago is not 22-year-old Kalman Varga's first multi-day bike ride. Last year Varga rode AIDS/Lifecycle in his home state of California and afterwards promised himself to participate in at least one ride raising money for the fight against AIDS each year.

"A few years after being diagnosed, I wanted to take part in the fight, raise awareness, and most importantly fight the stigma of being HIV positive," said Varga, who currently resides in the Old Town/Gold Coast neighborhood of Chicago. "I knew it would help me maintain a healthy lifestyle, live openly and be happier with myself."

Varga is just one of 278 riders, and 351 registered participants in total, who are a part of Test Positive Awareness Network's (TPAN) annual grassroots fundraiser this year. Ride for AIDS Chicago is a two-day, 200 mile cycling event that was officially created in 2004 to help raise funds for the fight against AIDS. The Ride has already surpassed last year's fundraising record of $535,000, with hopes to reach $575,000 over the weekend and $600,000 when every last donation has been counted.

"Unlike other rides of this kind, Ride for AIDS Chicago is committed to returning 100% of your pledges to the beneficiaries," reads the organization's website. "We are a grassroots event, committed to keeping costs as low as possible."

The website goes on to explain that the costs of the event are absorbed by each participant's registration fee as well as funding from corporate sponsors and donations of food, water and supplies. The funds raised benefit TPAN as well as their Community Partners -- an annually chosen group of smaller local nonprofits active in the fight against HIV/AIDS. This year's beneficiaries are AIDS Foundation of Chicago, About Face Theatre, Howard Brown Health Center and Chicago House.

Participants in the Ride are separated into two groups: riders and crew, the latter of which provide support for the riders by working at the pit stops and lunch spots for each day, transporting luggage and helping riders along the route. During the event HIV positive riders who choose to will wear an orange flag on their bikes as an outward sign of their battle against HIV. Positive crew members will similarly don orange bandanas. While participants do engage in training to prepare for the event, Ride for AIDS Chicago is not a race and Vargas looks forward to making as many friends on this ride as he did in California last year.

"The camaraderie on the ride is amazing," he told ChicagoPride.com. "Everyone belongs."

The riders will disembark after the Opening Ceremonies at 6:30 a.m. on Saturday morning, making their way north from Chandler Park in Evanston bound for Wisconsin. The Ride takes them along shady bike paths and country roads, around the shores of Lake Geneva to Lutherdale Camp in Elkhorn, WI. Once at camp, participants enjoy a hot meal and a leisurely evening of swimming in the lake, stargazing and making s'mores before spending the night in one of the camp's many cabins. After a hot breakfast, the riders head south for another day of scenic cycling before arriving back in Evanston for the Closing Ceremonies.

"The Closing Ceremonies has always been a fairly small event, but this year we are looking to change that," Richard Cordova, Director of Athletic Events at TPAN, told ChicagoPride.com. "We want EVERYONE to come out! Come enjoy the music and help to cheer the riders and crew members across the finish line."

Taking place on Sunday from 3 to 6 p.m. at Chandler Park in Evanston, adjacent to the Central stop on the CTA Purple Line, this year's Closing Ceremonies feature live music, booths by sponsors and great giveaways. Arlen Music and the Skyline Band will perform for the crowd both before and after the Procession of Riders, which is scheduled for 4:30 p.m. Spectators are encouraged to bring their own lawn chairs and blankets to the park. You can RSVP for the event on Facebook here.

For more information about Ride for AIDS Chicago or to make a donation, please visit www.rideforaids.org.

Related:View photos from Ride for AIDS, 2011