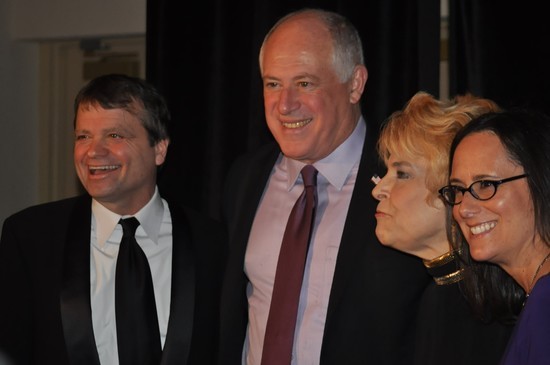 lisa madigan (right) at the eqil justice for all gala

The attorney general asks "to present the Court with arguments that explain why the challenged statutory provisions do not satisfy the guarantee of equality under the Illinois Constitution."

"It's no surprise that Attorney General Lisa Madigan, responsible for assessing the state's position on the constitutionality of its various laws, would find the marriage ban indefensible," national marriage project director for Lambda Legal Camilla Taylor said in a statement. "The marriage ban targets same-sex couples and their children for discriminatory treatment. Illinois elected officials at every level of state and federal government have come to the same conclusion that we have — that the marriage ban harms these families, and that it's just time to end this discriminatory chapter of our history."

Orr has gone on record in support of marriage equality.

The lawsuits, which make some of the same arguments used in Iowa and California, come a year after Illinois enacted civil unions.

Critics, including many of the couples in the lawsuit, argue civil unions have not proven to be the answer for LGBT families in Illinois, who need the protections that only marriage can provide.

A new survey released Friday by Equality Illinois, the state's oldest and largest LGBT advocacy organization, shows couples in civil unions endured clear and consistent patterns of unequal treatment, were denied rights and protections and faced stigmatization despite the intent of the law that civil unions be equal to marriages.

In May, Gov. Pat Quinn (D-Illinois) joined President Obama in support of marriage equality for gay and lesbian couples.