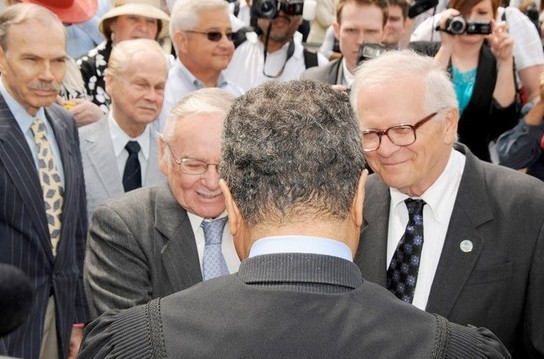 james darby & patrick bova among first to be united in 2011

Chicago, IL - A new study by Equality Illinois indicates couples in civil unions endured clear and consistent patterns of unequal treatment, were denied rights and protections and faced stigmatization despite the intent of the law that civil unions be equal to marriages.

"As we feared, civil unions have not turned out to be equal to civil marriages," said Bernard Cherkasov, CEO of Equality Illinois, the state's oldest and largest LGBT advocacy organization. "In area after area, whether tax law, health insurance, hospitalization, family issues, personal finance and actions by state and local officials, couples were either treated unequally or denied their rights, or singled out for discrimination.  As we learned in history, separate does not make equal."

The study found that same-sex couples in loving, committed relationships that were not allowed to marry, invited discrimination by stigmatization from public and private agents.

Among the report's findings, there was confusion over state income tax filing, problems with putting a civil union partner on company health plans, name changes allowed under state civil unions were difficult to apply to federal documents including passports, hospitals restricted patient access to a same-sex spouse and partners could not pick up prescriptions for a spouse.

In a statement, Director of Public Policy for Equality Illinois Randy Hannig said the findings should provide ammunition for the ongoing push for marriage equality in the Illinois General Assembly and the courts.

"We will be sharing our findings with legislators to demonstrate the breadth of the problems with civil unions, and we call on the House and Senate to enact civil marriage," Hannig said.

The survey of all 102 Illinois counties found that there were at least 4,910 civil union licenses issued statewide since the first licenses were issued June 1, 2011. There were 2,508 in Cook County, 845 in the five collar counties and 1,557 Downstate. There were licenses issued in all but eight of the state's 102 counties, or 92 percent of the counties.

With more than 32,000 same-sex couples in Illinois, according to the 2010 census, the Equality Illinois numbers indicate that more than 15 percent of them sought the recognition and security promised by civil unions in just the first year.

"Even though civil unions are not equal to marriages, the fact that so many couples wanted to make their relationships official in 92 percent of Illinois counties, from urban areas to rural areas, demonstrates the deep desire for sharing fully in the same kind of recognition afforded to only opposite-sex couples in Illinois," Cherkasov said. "Now, we will use the information gathered in our civil union assessment to help all couples enjoy the rights and responsibilities of civil marriage."

The report "One Year Later, Separate Has Not Proven To Be Equal," which was released Friday, is a collection of personal stories shared with Equality Illinois and information gathered through the Civil Union Tracker established by Equality Illinois and Lambda Legal after civil unions became law in the state on June 1, 2011.

"We cannot stand by and watch loving couples in civil unions—who thought they would be enjoying the same experiences as opposite-sex couples in marriages—endure these difficult and often embarrassing challenges," Cherkasov said. "The clearest and only solution is marriage equality."

The survey is available online at: http://eqil.org/cmsdocuments/2012CivilUnionsReport.pdf.