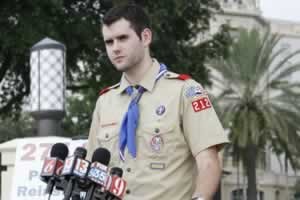 Zach Wahls on Wednesday delivered more than 275,000 signatures to the Boy Scouts of America calling on the group to reinstate Jennifer Tyrrell, the Ohio mom who in April was ousted as den leader of her son's Boy Scout troop because she is a lesbian.

The 32-year-old Tyrrell launched a Change.org campaign to bring awareness to the Boy Scouts' policy banning openly gay scouts and leaders after she was removed from her volunteer position because she failed to meet the group's "high standards of conduct" in relation to her being in a 5 year relationship with another woman.

"While today's meeting was productive and thoughtful, the delivery of these petitions marks the beginning of this journey, not the end," Wahls said. "I thought our dialogue today was an honest one, and I'm looking forward to continuing the conversation in the months ahead. We leave today one step closer to religious and personal freedom than when we arrived, and it's hard to be anything but thrilled about that."

"I am so grateful for the support I've received from Zach and from the thousands of scouts, scout leaders and former scouts who have signed my petition," Tyrrell said. "If you look at the petition comments, and read through the thousands of entries left by current scouts and scout leaders, it's clear that the energy within the Boy Scouts of America's membership is there to change this policy. All it takes now is leadership."

Wahls is the University of Iowa student who defended his two-mom family at an Iowa House hearing considering a proposed measure which would repeal the state's gay marriage law by defining marriage as a heterosexual union in the Iowa Constitution. A video of Wahls' testimony attracted more than 18.3 million views to become the most-watched video in 2011.