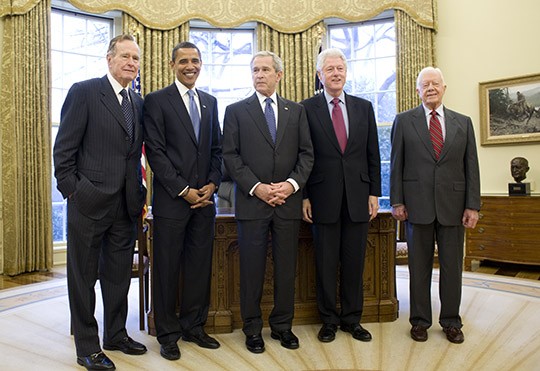 photo credit // white house photo
Chicago, IL - In his new book, "NIV Lessons from Life Bible: Personal Reflections with Jimmy Carter," the former president talks about his own support for gay marriage, but his unwillingness to force churches to allow same-sex nuptials.

"Homosexuality was well known in the ancient world, well before Christ was born and Jesus never said a word about homosexuality," he told the Huffington Post. "In all of his teachings about multiple things -– he never said that gay people should be condemned. I personally think it is very fine for gay people to be married in civil ceremonies."

Carter said his own church welcomes gays and lesbians.

"I'm a Baptist, and I believe that each congregation is autonomous and can govern its own affairs," he said. "So if a local Baptist church wants to accept gay members on an equal basis, which my church does by the way, then that is fine. If a church decides not to, then government laws shouldn't require them to."

Carter, who worked on a nuclear submarine in the Navy, also said it's ridiculous for people to take some "facts" about science straight from the bible.

"I don't have any doubt in my own mind about God who created the entire universe," he told the Huffington Post. "But I don't adhere to passages that so and so was created 4000 years before Christ, and things of that kind. Today we have shown that the earth and the stars were created millions, even billions, of years before."