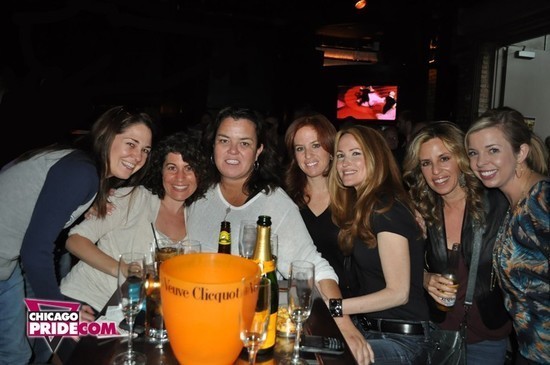 rosie o'donnell and friends at sidetrack in boystown chicago

The Chicago Tribune reports the last show will be March 30.

According to The Chicago Tribune, Winfrey said in a statement, "I thank Rosie from the bottom of my heart for joining me on this journey. She has been an incredible partner, working to deliver the best possible show every single day. As I have learned in the last 15 months, a new network launch is always a challenge and ratings grow over time as you continue to gather an audience. I'm grateful to Rosie and the dedicated Rosie Show team for giving it their all."

It was just 5 months ago that talk show host Rosie O'Donnell became one of the Chicago's highest profile LGBTs-in-residence when she bought a home in Lakeview.

Then last week it was reported that O'Donnell was packing up and moving her show to New York City.

"It was a great experience for me," O'Donnell shared on her Twitter feed today. She responded to followers, "It's ok. Do not cry. On we grow."

"The Rosie Show" debuted in October to 497,000 viewers, but fell to an average 204,000 viewers last month. The show was downsized earlier this year when the studio audience was eliminated.