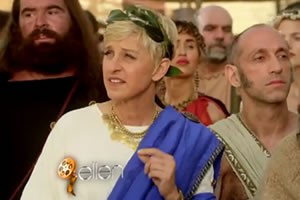 DeGeneres gave viewers of her The Ellen DeGeneres Show a preview of the commercials on Friday.

In one of the ads, DeGeneres is seen in ancient Rome. She tussles with a Victorian England hat store clerk in another.

JCPenney has been under attack by the AFA group One Million Moms, which has called on the retailer to fire DeGeneres as their spokesperson because she is openly gay.

The group accused JCPenney of "jumping on the pro-gay bandwagon." A move it claimed would leave the company with fewer customers.

"Funny that JCPenney thinks hiring an open homosexual spokesperson will help their business when most of its customers are traditional families," the group said in a statement.

DeGeneres, who came out gay in 1997, is also a spokesperson for CoverGirl and American Express.

During a CBS This Morning interview, JCPenney CEO Ron Johnson stood by DeGeneres – saying she was the "perfect" spokesperson for his company – and brushed aside the controversy.