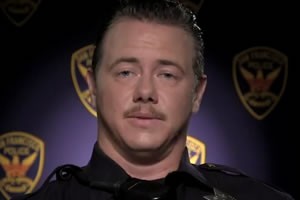 San Francisco, CA - The San Francisco Police Department has recorded a video for the It Gets Better campaign.

The It Gets Better Project encourages bullied LGBT teens considering suicide to hang in there, because life eventually gets better.

In the nearly 9 minute video, employees of the department discuss what it was like for them growing up and how they came out to family, friends and co-workers.

"I didn't really have any positive gay role models that I thought were out there," a female police officer says.

"All of the imagery that was associated with gays or lesbians was the limp-wristed hairdresser."

"Someone that you were supposed to laugh at or someone that was to be ridiculed," a male officer says.

"So I didn't have anything that showed me that it was okay to be who I am," a female officer adds.

"I expected my father to have a very different reaction than he did," a female commander says. "He looked up at me and he said,
'Are you happy?' And I said, 'Yes.' Then he just looked down and said, 'Then who gives a shit.'"