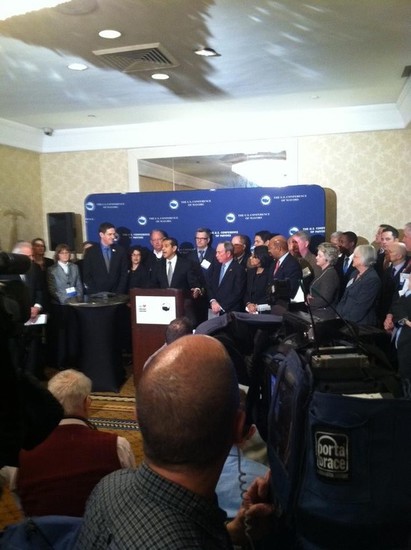 mayors from across the country join coalition

The coalition known as Mayors for Freedom to Marry officially launched Friday morning during a press conference at the U.S. Conference of Mayors annual gathering in Washington, D.C.

"The question is not if marriage equality will come to all 50 states, the question is when," Bloomberg said during the press conference. He added that as the mayor of the largest city in the country to allow marriage rights to same sex couples, "equality has only made New York City stronger."

Emanuel, who did not speak at Friday's press conference, told reporters Thursday, "Marriage is recognition of love and the state should not be in the business of discriminating."

Each mayor in the group, which included Emanuel, Bloomberg and Republican Jerry Sanders of San Diego, pledged an organized effort to support full marriage equality while opposing discrimination in the federal and state constitution.

Locally, Equality Illinois (EQIL) took the lead in the joint effort to sign on Emanuel and Mayors Elizabeth Tisdahl of Evanston and Robert Sabonjian of Waukegan as early supporters of the campaign. EQIL indicated more mayors from across the state have expressed interest.

"The bipartisan panel of mayors from every corner of the country standing up in support of marriage equality just underscores the strength of the movement," EQIL CEO Bernard Cherkasov told ChicagoPride.com.

"If we truly believe in family values, we should value all families," said Villaraigosa, president of the U.S. Conference of Mayors and a co-chair of the new group. "We hope other mayors will sign the pledge and join Mayors for the Freedom to Marry."

The group's position on marriage equality could put increased pressure on President Barack Obama when it comes to same-sex marriage.