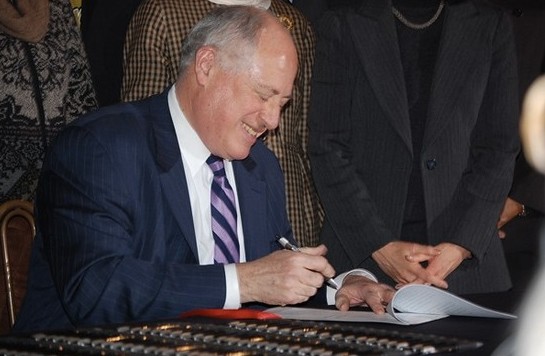 Part one of a special two-part year in review

2011 marked an eventful year for Chicago's LGBT communities. From the start of the year, when queer Chicagoans played an active role in the lead-up to the city's much-anticipated mayoral election to the end, as same-sex couples throughout the state marked the six-month anniversary of the legalization of civil unions in Illinois, the community celebrated many highs.

But the year was also not without its low points: From the passage of some of the city's brightest community leaders to the widely publicized summer crime incidents that pitted constituencies of the city's Lakeview neighborhood against each other, much was thrown in gay Chicago's direction that thoroughly tested its resilience and ability to heal.

But one thing was consistent across all the good and the bad of LGBT Chicago's 2011: The Windy City is home to some of the most passionate, hard-working and innovative lesbian, gay, bisexual and transgender minds in the country and not even deeply hurtful words and actions of the community's adversaries can hold them back.

Below is part one of a special two-part year in review revisiting 11 of the biggest news stories from the past 12 months. First, this week, ChicagoPride.com will recognize some of the top stories of the first six months. Next Thursday, the feature will continue with stories from the last half of the year.

Civil unions become law
On Jan. 31, some two months after the state legislature approved the Illinois Religious Freedom and Protection and Civil Union Act, Democratic Gov. Pat Quinn signed the legislation into law before a crowd of thousands at the Chicago Cultural Center. The measure, originally introduced in February of 2007 by state Rep. Greg Harris (D-Chicago), allows same-sex couples to enjoy all of the same legal protections, at the state level, as heterosexual couples.

"It is special honor to be part of this day in history," Quinn said as he signed the bill. "Our state began in 1818 and here we are in 2011 on the eve of Lincoln's birthday because we believe in civil rights and civil unions."

The law went into effect on June 1, when couples in downtown Chicago lined up outside the Cook County Clerk's office. Janean Watkins and Lakeesha Harris, a downstate lesbian couple who camped out overnight for a spot at the front of the line, were the first couple in Cook County to be registered for an Illinois civil union. Many couples marked their unions at a group ceremony presided over by Cook County Circuit Court Chief Judge Timothy Evans and a number of circuit court judges at Millennium Park and second ceremony hosted by The Civil Rights Agenda at the Chicago History Museum. By the start of December, more than 3,700 couples, including a number of straight couples, reportedly applied for civil union licenses statewide.

Mayor Rahm takes the reins
Rahm Emanuel was formally sworn in as Chicago's new mayor in May, some three months after he was overwhelmingly elected to succeed former mayor Richard M. Daley. Emanuel received the support of some 200 LGBT community leaders and advocates due largely to his help bringing the city's impressive Center on Halsted into reality while he served in Congress.

"The LGBT community has had an amazing ally in Mayor Daley, and I believe that will be true of Mayor Emanuel as well," Anthony Martinez, The Civil Rights Agenda executive director, told ChicagoPride.com.

'Boystown' controversy
Plans for a much-touted reality show centered on Chicago's Boystown neighborhood came to a halt after the Windy City Times brought to light the executive producer's criminal past and status as a registered sex offender with three prior convictions of criminal sexual assault. David Schlessinger claimed that the report "only serve[d] to publicly humiliate me" and vowed that the show, which hosted casting calls in Chicago in April, would go on. To date, it has not.

A prideful month
In June, Chicago played host to a seemingly endless stream of unique events marking Pride Month in the city. About Face Theatre's production of "The Homosexuals," which made waves in the Chicago theatre community and landed on many critics' best-of-2011 lists, opened this month to widespread acclaim. June also marked the release of the Chicago Cubs' "It Gets Better video. The Chicago History Museum hosted their phenomenal "Out in Chicago" exhibit, dedicated to the history of the city's queer communities through the years. The Cubs were the second professional sports team to join Dan Savage and Terry Miller's now ubiquitous campaign.

The parade marches on
While Chicago's annual Gay Pride Parade has developed a reputation for boisterousness, its 42nd annual, 2011 edition was arguably the largest and most eventful yet. The parade got off to a rough start at dozens of tires on floats due for the parade were cut with knives the evening before it stepped off. Some of the damaged floats were not able to be repaired in time for the parade.

The parade ultimately attracted a record 750,000 revelers, including Mayor Rahm Emanuel and Governor Quinn, who took in its 250 entrants. The parade was so crowded that it was cut short when many marchers were redirected to walk down Clark Street, instead of starting down Halsted. The crowding made for several changes to the parade's route and start time, though some of those changes, namely a newly proposed 10 a.m. start time, were ultimately reversed.

Click here for the second half of our queer Chicago year in review.

Joseph Erbentraut is the associate Chicago editor of The Huffington Post. His work has been featured in the Village Voice, ChicagoPride.com, the Windy City Times, Chicagoist, Gapers Block and other publications.