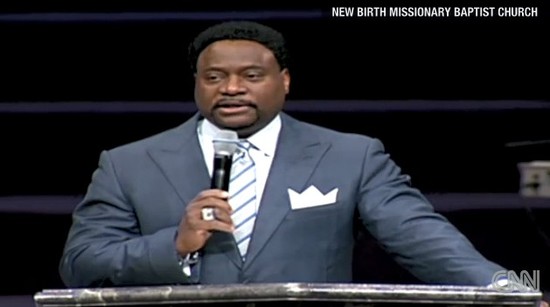 bishop eddie long steps down after wife files for divorce

photo credit // cnn.com
Atlanta, GA - Prominent anti-gay Atlanta pastor Eddie Long, who was accused last year of coercing young male members of his church into sexual relationships, announced Sunday that he is taking time off to focus on his family.

The announcement came three days after his second wife, Vanessa Long, filed for divorce to end their 21-year marriage.

"I'm going to take a little time off to work with my family," Bishop Long said Sunday from the pulpit of his 30,000-member New Birth Missionary Baptist Church, which he's headed since 1987.

The split follows the 2010 allegations that Long lured four young men - all members of his church - into sexual relationships. Several of the accusers said the powerful pastor began having inappropriate relations with them when they were just 16.

According to the lawsuits, Long instructed the young men as "spiritual sons" to "follow their master," while enticing them "with cars, clothes, jewelry, and electronics."

Long initially denied those charges, but settled the cases this spring without admitting any wrongdoing.

Vanessa Long filed for divorce on Thursday, later her husband's church issues a statement Friday stating she was withdrawing the divorce petition. Vanessa's attorney disputed the statement and said she was moving forward with the divorce.

Long told the crowd in the packed auditorium that the situation is "not because of allegations" of sexual relationships last year. He blamed the divorce on the stress of being a pastor's wife.

The megachurch pastor, who lives a lavish lifestyle that includes a $350,00 Bentley and $1.4 million home, is considered to be one of the nation's top and most homophobic black preachers.

In 2007, the Southern Poverty Law Center called Long "one of the most virulently homophobic black leaders in the religiously based anti-gay movement."