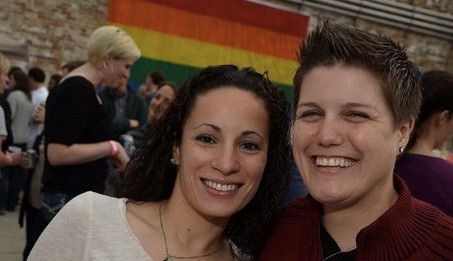 photo credit // thelstop.org
Indianapolis - Newly released audio tapes show that minutes before a stage at the Indiana State Fair collapsed, police were wondering if they should evacuate the crowd.

Seven people were killed in the August tragedy, and more than 40 others were injured.

The tapes, obtained by WTHR of Indianapolis, show that workers were warned five minutes before the Sugarland stage collapsed that severe weather would be moving in within 30 minutes.

Two minutes later, someone using the Indiana State Fair radio systems says they will "check and advise" whether concert attendees are being evacuated from the stands.

Within three minutes, a 60 mph wind gust tore apart the stage rigging, sending it smashing into audience members in the front rows.

The collapse took the life of Christina Santiago of Chicago, who was active in the lesbian community and who acted as programming manager for the Lesbian Community Care Project at the Howard Brown Health Center. Santiago's partner, Alisha Brennon, was seriously injured.

Brennon and Santiago were among the first couples in Illinois to enter into a civil union when the partnerships became legal in June.