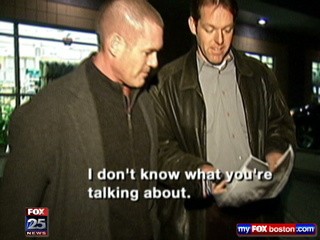 That is according to a report from WFXT in Boston.

The TV station said that Hogan's screen name is "Hytch Cawke," and that he appeared in "Gone Gay 8" and "Fetish World" in 2010.

Hogan was hired by the top-flight school in Malden, Mass. In 2010 as well.

"I don't know what you are talking about," Hogan said when he was confronted by the TV crew.

Hogan is also the crew coach, and parents said that he has been a hit with the kids.

"The kids really love him," said Stephanie Saponaro, whose son is on the team. "He's been a great addition. I'm surprised. I'm disturbed."

The school told the TV station they didn't know about the movies, and that they had done background checks in Massachusetts and California, where Hogan had worked.

"The references we received were flawless," Mystic Valley said in a statement.

Hogan has been placed on paid administrative leave.