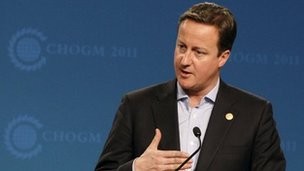 "We want to see countries that receive our aid adhering to proper human rights and that includes how people treat gay and lesbian people," Cameron told the BBC.

The issue of human rights reform was one issue discussed by leaders at the Commonwealth Heads of Government Meeting in Perth, Australia, which started on Oct. 28.

According to the BBC, some 41 nations in the 54-member Commonwealth have laws banning homosexuality.

Lawmakers in Uganda, a member of the Commonwealth, recently voted to reopen debate on a bill which would outlaw homosexuality with the possibility of the death penalty for gays and lesbians.