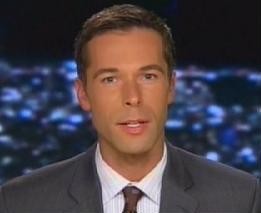 New York City - ABC "World News Now" fill-in anchor Dan Kloeffler was so moved by the story of "Star Trek" actor Zachary Quinto coming out, that talked about his own sexuality for the first time on TV.

Kloeffler was filling in on the irreverent, nationally broadcast "World News Now" early morning show when he read the story about Quinto coming out. Quinto had said he was motivated by the suicide of Jamey Rodemeyer, a gay teenager in upstate New York.

Kloeffler make a joke about dating Quinto, and then later talked more about it on his blog, which he titled "To Boldly Go":

"I've never shared that I'm gay on-air, even though I've been out to my family, friends and co-workers for years. In fact, an old boyfriend – now best friend – has always given me a hard time about not doing so. But for the same reason that Zach decided to come out, I too, no longer wanted to hide this part of my life," Kloeffler wrote.

"There have been too many tragic endings and too many cases of bullying because of intolerance. As a kid I wanted someone to look up to, someone that could relate to the feelings I was having. Most of all, I wanted to know that it would get better. And it did.

"As a journalist, I don't want to be the story, but as a gay man I don't want to stand silent if I can offer some inspiration or encouragement to kids that might be struggling with who they are," he wrote.