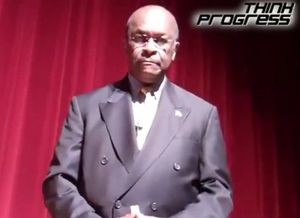 Cain believes homosexuality is a sin and a choice

Toomey was Cain's senior political advisor until last Spring and was also the Cain PAC treasurer.

The issue is coming to light because of the testimony of another former employee, Kevin Hall, who is trying to get unemployment benefits. Hall says he quit his job as a straw poll coordinate in Iowa because he didn't want to help the campaign cover things up.

"A conservative candidate, Mr. Cain is on the record as saying that he believes homosexuality is a sin and a choice. [Campaign aides] know that, if his top... highly paid advisor is openly gay, that would cast a negative light on Mr. Cain," Hall testified.

Hall testified that when Toomey's homosexuality "became an issue" among Iowans, Cain's spokeswoman Ellen Carmichael told him and others that Toomey no longer worked for the campaign.

However, Hall said that Toomey remained part of the campaign and that some payments to Toomey were funneled through his consulting firm, The Soarin' Group of Chicago, so as to hide their actual recipient.

A Cain spokesperson told the Associated Press that Hall is a "disgruntled former staffer" who worked for the campaign for less than a month.

Toomey, who is gay, had served as a treasure for the Madison, Wisconsin Pride Board. The Madison Pride board reportedly removed Toomey as treasurer in 2008 over "financial discrepancies."

Cain, a minister at Antioch Baptist Church North in Atlanta and former CEO of Godfather's Pizza, has previously called for the impeachment of President Obama over his administration's position to no longer defend in court the Defense of Marriage Act (DOMA), the law that forbids federal agencies from recognizing the legal marriages of gay and lesbian couples.

Video: In June, Cain said he would not have a problem appointing an openly gay person to his cabinet.