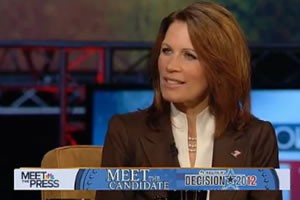 During an interview on CNN's State of the Union, the Minnesota congresswoman told Candy Crowley that as president she would work to reinstate "Don't Ask, Don't Tell," the policy set to expire on September 20 that bans gay and bisexual troops from serving openly.

"I would be in consultation with our commanders, but yes, I probably will reinstate the ban," she added.

And during an appearance on Meet the Press, David Gregory relentlessly pressed Bachmann for her views on gay rights.

After sharing a 2004 clip in which Bachmann is heard saying, "It's a very sad life. It's part of Satan, I think, to say that this is 'gay.' It's anything but 'gay.' It leads to the personal enslavement of individuals. Because if you're involved in the gay and lesbian lifestyle, it's bondage. It is personal bondage, personal despair, and personal enslavement. And that's why this is so dangerous. We need to have profound compassion for people who are dealing with the very real issue of sexual dysfunction in their life, and sexual identity disorders."

When Bachmann responded that she believes gay people "have honor and dignity," Gregory asked: "Do you think gay Americans hearing quotes like that from you would think that that's honor and dignity coming from you about their circumstance?"

"I am not anyone's judge," she responded.

Bachmann protested when Gregory continued with the line of questioning, asking whether she would appoint an openly gay person to her cabinet and whether she believed children being raised in a household headed by a gay or lesbian couple are a family.

"I think," Bachmann, who remained calm, responded, "my views are clear."