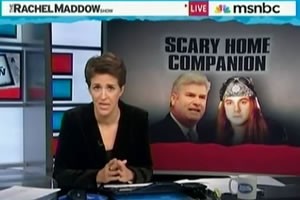 Dean has accused Maddow and the network of defaming his name.

The man behind the ministry You Can Run But You Can't Hide International claims Maddow falsely reported that he called for the execution of gay men and lesbians.

Last year, Maddow reported that Minnesota Republican gubernatorial candidate Tom Emmer had given money to Dean's heavy metal band, the Junkyard Prophets. Emmer, who lost the election to Democrat Mark Dayton, said he supported the band because "These are nice people."

For contrast, Maddow noted a statement from the controversial minister who also hosts the syndicated radio program The Sons of Liberty.

"Muslims are calling for the executions of homosexuals in America. This just shows you they themselves are upholding the laws that are even in the Bible of the Judeo-Christian God, but they seem to be more moral than even the American Christians do, because these people are livid about enforcing their laws. They know homosexuality is an abomination. … If America won't enforce the laws, God will raise up a foreign enemy to do just that. That's what you are seeing today in America."

On the program, Maddow added: "Mr. Bradlee with two e's later clarified that he didn't really mean to sanction [the] murder of gay people. He said, 'We have never and will never call for the execution of homosexuals.' Which is nice." (The video is embedded below.)

"The radical homosexuals want to re-educate America by teaching people of all ages to hate the laws that expose their crimes. So the next time you hear 'hate crimes,' remember that is the criminal who hates the law," he wrote in a June blog post taking credit for passage of a constitutional amendment banning gay marriage in the Minnesota Legislature. The amendment will appear on next year's ballot.

Bachmann has also supported Dean, once praying for his ministry.

"The left wing media's effort to defame Dean is an obvious way to try to harm Bachmann's presidential prospects, who they fear and despise," the group wrote in a statement announcing the lawsuit.

Dean is seeking $50 million in damages.