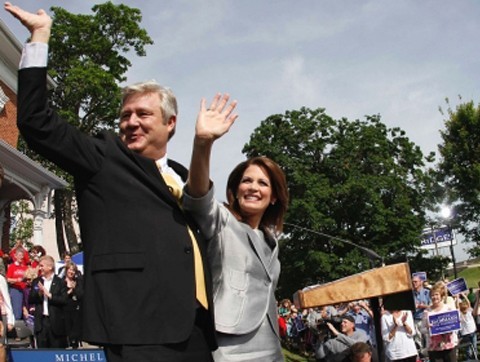 Minneapolis, MN - A Minnesota school district represented by Michelle Bachmann (R-Minn.), where over the past two years nine young people have committed suicide, is under federal investigation for infringing on civil rights. Critics blame Bachmann's anti-gay stance for creating a "climate of intolerance."

According to an investigative piece published Monday by Mother Jones, the Justice Department and the Department of Education's Office of Civil Rights are investigating the Anoka-Hennepin County School District in Bachmann's district over anti-gay bullying allegations.

At least four of those who committed suicide were openly gay or perceived to be gay by classmates, most were said to have been bullied at school. Suicide prevention experts have called the string of suicides an "epidemic."

David McFarland, acting Executive Director and CEO of The Trevor Project, told MSNBC that he believes the anti-gay policies, known as "no promo homo," at the Anoka-Hennepin district are to blame for the spike in teen suicides.

"It is an unfortunate situation we are seeing in the country and certainly needs to be addressed," said McFarland.

Anoka-Hennepin is not only located in Bachmann's home district, but it's her alma mater. McFaland says Bachmann "has not made change in that district."

Critics say Bachmann's recent signing of a pledge that states homosexuality is a choice has only added to the crisis in her district.

Since 2004, Bachmann has been very vocal about the issue of school bullying. The Republican in 2006 spoke out against an anti-bullying bill.

'I think for all of us, our experience in public schools is there have always been bullies,' Bachmann told the Minnesota state legislature at the time. 'Always have been, always will be.

The last suicide in the Anoka-Hennepin district was when 14-year-old Jordan Yenor took his own life in May, promoting school officials to look at additional resources to help students.

The school district had previously refused to add lessons about homosexuality to the curriculum and several LGBT students are suing the district claiming their complaints over harassment, both physical and verbal, went ignored.

According to Mother Jones, school employees were not allowed to teach homosexuality was a "normal, valid lifestyle" under policies influenced by the Minnesota Family Council and The Parents Action League, supporters of Bachmann's congressional campaign. The two religious groups also reportedly lobbied to put ‘reparative therapy' materials into schools.

Bachmann and her husband, Dr. Marcus Bachmann, run a Minnesota-based Christian clinic that has been linked to the discredited ‘therapy' designed to ‘cure' gays.

Visit msnbc.com for breaking news, world news, and news about the economy