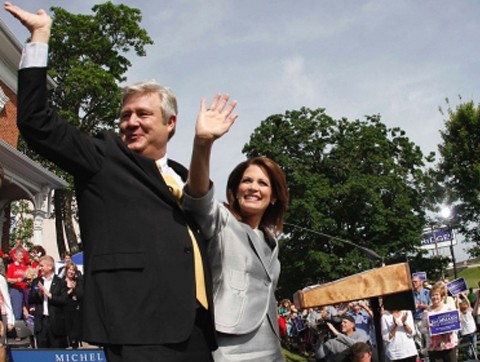 Truth Wins Out, a non-profit organization that fights anti-gay extremism, claims to have first hand knowledge that Christian counselor Dr. Marcus Bachmann's clinic, Bachmann & Associates, performs "ex-gay" therapy after one of their members went through a session.

During a week long undercover investigation, Truth Wins Out's Communications and Development Director John Becker went to Bachmann's Minnesota clinic with an undercover camera for therapy sessions. He was told he was a "heterosexual dealing with a homosexual problem."

He was then advised to find a "heterosexual accountability buddy" and was given the book "Why I'm Better Off Not Gay," which is written by Bachmann's friend Janet Boynes, who is an ex-gay advocate and former lesbian. The individual was also given ex-gay friendly churches to attend, and even reminded that he and his other gay friends could still possibly make it to heaven — if they repent thoroughly first.

Allegations of the Bachmann's ties to the "ex-gay" movement, which is a controversial and discredited clinical method designed to "cure" gay people, has been known in Minnesota for years. But no one has offered proof, until now.

"It's time for Michele and Marcus Bachmann to stop denying, dodging, and stonewalling," said Becker. "They owe it to all Americans to provide a full and honest explanation for their embrace of these dangerous and fraudulent practices."

As part of their report, Truth Wins Out questions the use of state- and federal funds to endorse and practice reparative therapy aimed at changing a gay person's sexual orientation.

Earlier this week, Rep. Bachmann signed a vow pledging to ban gay marriage on a federal level as part of her campaign for president. Some people have questioned whether her husband, who has called gays and lesbians "barbarians," is a closeted gay man.

Read the full account of the experience at Truth Wins Out.