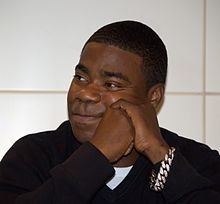 Comedians and actors are responding to Tracy Morgan's homophobic tirade during a show in Nashville, for which the 30 Rock actor later apologized.

"I am disgusted and appalled by Tracy Morgan's homophobic rant," openly gay actor Cheyenne Jackson, who costars with Moran on NBC's 30 Rock, said in a statement provided to Out magazine.

30 Rock executive producer and co-star Tina Fey said, "The violent imagery of Tracy's rant was disturbing to me at a time when homophobic hate crimes continue to be a life-threatening issue for the GLBT community."

Funnyman Chris Rock, who co-stars with Morgan in the Death of a Funeral, differs in opinion and seems to condone Morgan's anti-gay hate.

"I dont know about you, but I dont want to live in a world where Tracy Morgan cant say foul inappropriate shit," tweeted Rock.

Comedian Wanda Sykes, a married lesbian with twins, tweeted, "I fault the TN lawmakers. They've created an anti-gay environment. Don't believe Tracy would be so ignorant in LA. I do believe in free speech, but for a youth in TN or any other numerous place, Tracy just yelled, ‘Fire,' in a crowded theater."

Morgan's vicious anti-gay attack came to light when audience member Kevin Rogers, who is gay, wrote about the June 3 show on Facebook. Rogers who said he was prepared for gay humor described Morgan as "truly filled with hate against us."

"He said if his son that was gay he better come home and talk to him like a man and not [he mimicked a gay, high pitched voice] or he would pull out a knife and stab that little N (one word I refuse to use) to death," Rogers wrote. "Tracy then said he didn't fucking care if he pissed off some gays, because if they can take a [expletive] dick up their ass... they can take a [expletive] joke."

After news of Morgan's homophobic tirade swept through the Internet, including a GoPride.com article on Thursday, the actor quickly issued an apology.

"I hope for his sake that Tracy's apology will be accepted as sincere by his gay and lesbian co-workers at 30 Rock, without whom Tracy would not have lines to say, clothes to wear, sets to stand on, scene partners to act with, or a printed-out paycheck from accounting to put in his pocket," said Fey.

Ironically, a gay man is producing the film that Morgan is currently shooting, "Predisposition," and he said that Morgan cried on Friday over the situation.

"I'm struggling to understand the disparity between Tracy's behavior on our set and the things he said on stage," said Robert Nyswaner. "Yesterday, on the set of our movie, I sat in a minivan with Tracy Morgan, who wept as he told me about his violent childhood. Yesterday, while the world Tweeted away, issuing accusations and condemnations, a black, straight comic and a white, gay writer sat in a minivan, crying and trying to understand."

The Gay and Lesbian Alliance Against Defamation (GLAAD) has asked Morgan to remove the violent anti-gay remarks form his show. The group is also asking Morgan to meet with families who have lost children to anti-gay violence and LGBT youth who have been rejected by their families.