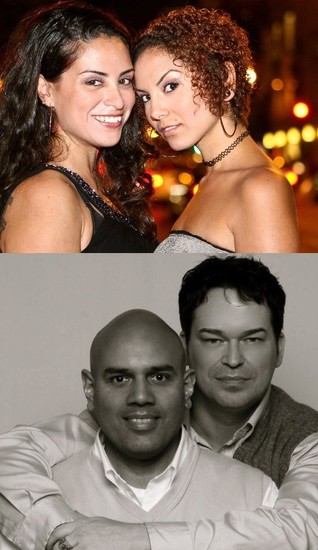 Chicago, IL - When Jayson Bernard first met his partner Roberto Rosario some eight years ago, they both found themselves in a situation all-too-familiar to some Boystown bar-goers: The lone sober person in their party of folks who had enjoyed a vodka-soda or three too many. Some six months later, Bernard and Rosario were living together.

For Vanessa Pabon and Erica Feliciano, their first meeting actually took place online late in 2009. Though both were adverse to online dating and, as such, had not yet contacted each other, they crossed paths again at a ladies' night about a week later and Pabon says they have been inseparable ever since. Seven months after that ladies' night, on Father's Day, Feliciano proposed and they moved in together a few months thereafter.

Both couples are just two of the hundreds (if not more) of same-sex couples living in Illinois expected to file for civil unions as of today, June 1, when the bill, signed into law by Governor Pat Quinn late January of this year, goes into effect. Upon applying for their licenses, paying a small fee akin to a marriage license and waiting at least one day, the couples will be able to hold a civil union ceremony and enjoy a large portion of the same protections and responsibilities afforded to heterosexual married partners.

Chicago is marking the occasion with a number of events, including a mass civil union ceremony, titled Unite with Pride, to be held at the Chicago History Museum this Friday, June 3. The event, sponsored by as well as benefiting The Civil Rights Agenda (TCRA), will include some 40 couples exchanging their vows at the museum's Uihelin Plaza before enjoying a black-tie optional reception.

Anthony Martinez, TCRA executive director, said the response to the event has been marked with a great deal of excitement and anticipation. As recently as last week, they were still hearing from more couples who wished to participate in their event.

"I think it just goes to show how excited the LGBT community and broader community here in Illinois is about this specific act going into effect," Martinez told ChicagoPride.com.

Many participating couples are coming from throughout the state to be a part of the event, celebrating the civil union milestone as part of a community event that benefits TCRA's Families United Project. The project's goal is to "gain equality for every family in Illinois through the use of social media, political advocacy and by building community."

Equality is the key word there. While many LGBT advocates in Illinois are thrilled that the civil union provision will allow for much-needed legal protections allowing for committed same-sex couples to take care of each other, separate is not equal and the goal, for many, remains full marriage equality.

But that doesn't mean this achievement, the result of several years of lobbying, education and introduction of similar bills led by lawmakers and advocates including Representative Greg Harris, veteran activist Rick Garcia, Representative Deb Mell and many others, is not worth celebrating. This is particularly the case for the couples for whom the distinction marks an important step forward for themselves, their relationship, their families and the communities with which they identify alike.

"On one hand, I can see where it's disappointing that it's not marriage, but why live your life in disappointment?" asked Pabon, who will be participating in the TCRA event with her partner. "This is still an amazing stepping stone, a huge leap forward from where we've come and these are the victories that are going to get us to complete equality across the board."

"We still will keep fighting and try to get exactly where we need to be but there's no reason why we can't take a minute to celebrate where we've gotten to so far," she added.

In preparation for the big day, Pabon and Feliciano, who live on The North End of Lakeview, have both picked out dresses -- for Pabon, an off-white dress with "lots of bells, whistles and lace" from the Jessica McClintock store in Woodfield Mall and for Feliciano, who typically feels most comfortable in jeans and chucks, a more casual Ralph Lauren cocktail dress. They are excited to mark their union in the company of other couples in a similar boat.

"We thought it would be great to participate in the event because it'll be so special, historical and beautiful," Pabon said. "It'll be so beautiful to share it with everybody. They are not strangers but these are people of our community who feel the same way we do and have had the same struggles."

In addition to inviting their family and friends to the TCRA event, they are also planning a separate Sunday brunch, one of their favorite traditions, allowing for a more private gathering.

For Bernard and Rosario, who live off Roscoe in the heart of Boystown with a German Shepherd named Sammy, their excitement for the event really took off when they found it difficult to avoid choking up while being fitted for tuxedos last week. The upcoming event is significant for them as culminating a desire they've had for some three years to see their relationship recognized in the state and country where they live, without having to travel to Canada or Iowa for a ceremony. In addition to the mass civil union event, they will also be hosting a barbecue reception in their back yard for some 100 of their visiting friends and family.

"We felt it was our duty as a couple that is established and loves each other so much to come forward and get a civil union right away to show that there are more people like us out there," Bernard shared. "We're excited to show our friends and family and the rest of the community how serious we are about our relationship and where we see each other together in the future."

"Growing up through the years, we've always been going to heterosexual weddings, so now it's finally our turn," Rosario added.

And though it's not marriage, Bernard sees the civil union law going into effect as "a victory that's not something to be taken lightly."

"I think that when hopefully the rest of the country and world sees the love that this produces maybe they'll start taking that step toward supporting a more traditional marriage," he added. "I think this is a great way to test the waters and show the rest of the world that it is OK. We will build from this."

Both couples are also planning larger events in the future to mark their union along somewhat more traditional lines -- for Pabon and Feliciano, an event in late 2012 and for Bernard and Rosario, a reception marking their tenth anniversary as a couple in 2013.

Besides the TCRA event, Equality Illinois and Lambda Legal are co-sponsoring another mass civil union-type event in Millennium Park on Thursday, June 2. That event is expected to feature Governor Quinn and newly-inaugurated Chicago Mayor Rahm Emanuel. The organizations are behind a Civil Union Tracker, which grants access to a variety of resources for newly unionized couples who might have questions about the process.

Out in Bolingbrook at the aLoft Hotel, DreamGayWeddings.com is also hosting an event of their own to commemorate the occasion in conjunction with a fundraiser for the It Gets Better Project.