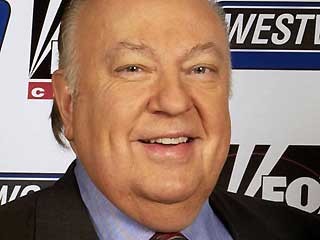 photo credit // foxnews.com
New York City - A new Rolling Stone profile of FOX News Chairman Roger Ailes talks about his single-minded pursuit of Republican and television domination -- and also about his intense fear that gay protesters would hunt him down and kill him.

"How Roger Ailes built the FOX News Fear Factory" traces Ailes' rise from a childhood with an abusive mother to his years as Richard Nixon's media consultant.

Then, in 1994, he was put in charge of a fledgling FOX News and went on a purge of staffers, Rolling Stone reports, making sure that everyone met his red state litmus test.

News Corp. CEO Rupert Murdoch moved Ailes into a second-floor corner office overlooking the Avenue of the Americas in New York City, and the magazine said the location terrified him.

In 1989, he had choked and shoved a gay protester who was trying to confront Mayor Rudy Giuliani, and he lived in fear the men would come back and kill him.

"Barricading himself behind a massive mahogany desk, Ailes insisted on having 'bombproof glass' installed in the windows – even going so far as to personally inspect samples of high-tech plexiglass, as though he were picking out new carpet," Rolling Stone reports. "Looking down on the street below, he expressed his fears: 'They'll be down there protesting,' Ailes said. 'Those gays.'