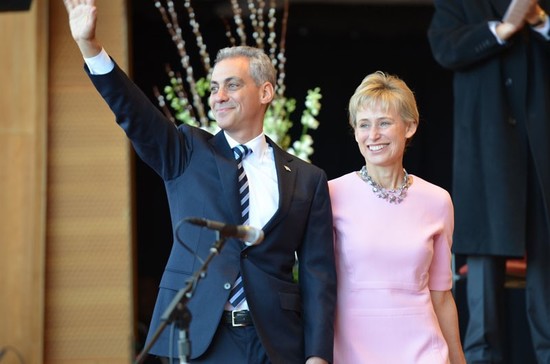 mayor rahm emanuel and wife, amy, at his inauguration

Gov. Quinn signed the the civil unions legislation into law on January 31 during a ceremony in downtown Chicago, making Illinois the sixth state to allow civil unions. The law also includes provisions for hospital visitation and healthcare decision making.

The celebration, hosted by Chicago's Commission on Human Relations' Advisory Council on Lesbian, Gay, Bisexual and Transgender Issues, will begin at 10 a.m. in Wrigley Square at Millennium Park, Randolph Street and Michigan Ave.

Cook County Clerk David Orr, the Hon. Timothy C. Evans, Chief Judge of the Circuit Court of Cook County, and members of the Alliance of Illinois Judges will officiate the civil union ceremonies.

The event is co-sponsored by The Chicago Department of Cultural Affairs and Special Events in partnership with the Chicago Office of Tourism and Culture, Lambda Legal, Equality Illinois, and the Alliance of Illinois Judges.

Rick Aguilar Studios will photograph the historic civil union ceremonies in Millennium Park. Nationally recognized for his wedding photography, Aguilar and his associates will provide photographs that not only document this moment in history but also capture the beauty and emotion of the first civil unions in the state. Stitely Entertainment will provide a string quartet for the gathering, and a performance by the Chicago Gay Men's Chorus will begin the civil union ceremonies.