Will Sheridan follows Rick Welts out of the closet 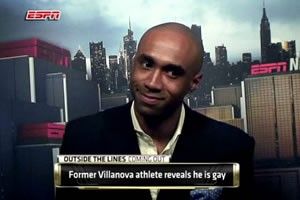 photo credit // espn
Will Sheridan, a former Villanova basketball player, announced on Monday in an interview on ESPN that he's gay.

Sheridan came forward a day after Phoenix Suns' CEO and President Rick Welts came out of The Closet in an interview with the New York Times.

The 26-year-old Sheridan discussed his sexuality during an appearance on the network's Outside The Lines.

When asked why he decided to come out, Sheridan replied: "I'm kind of over it. Everyone close to me knows. Everyone who matters to me knows. I'm at a point where someone else can learn from my experience."

In an expanded story on the network's website, Sheridan's parents, Will Sr. and Josie Sheridan, sounded conflicted over the news.

"Devastated. I was devastated," Josie Sheridan said. "I mean, I was disappointed. Not in him, but in things that were taken away – not having a daughter-in-law, grandchildren, things like that."

But added that she was proud of her son: "I've always been so proud of him, but he has such courage. This takes courage."

Will Sr., a religious man, said he did not speak to his son for over a year.

"I don't use the word 'tolerate.' I 'appreciate.' I appreciate that this is who he is, and I believe this is who God wants him to be," Will Sr. told ESPN.

But then added: "I treat him like he ain't. I believe one day he's going to change. He says he's not, but I believe he will. A man has to have some kind of belief and hope."

Sheridan has concentrated on his musical career since leaving college. His 4-track album, Ngoma, which is Swahili for music, was released in October.