Daley and queer Chicago: Reflections on the mayor's last week 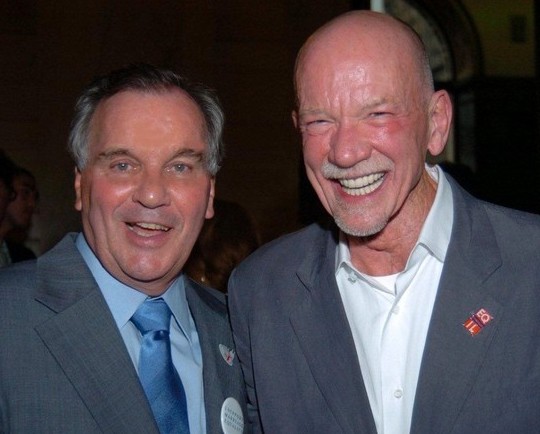 photo credit // jay shaff
Chicago, IL - After 22 years in office, Richard M. Daley is set to wrap up his tenure as mayor of Chicago with his retirement effective next Monday.

"Since I became Mayor, I have been a friend and supporter of the lesbian, gay, bisexual and transgender (LGBT) communities," Daley told ChicagoPride.com on the eve of his exit. "I have been committed to initiatives, programs and resources to strengthen the LGBT community and make it central to the life of our great city."

Though his record on LGBT issues is not without flaw, Daley is recognized by many activists within the community as one of Illinois' (if not the nation's) most important and vocal allies with a list of accomplishments few elected officials could match including, but not limited to: In 1991, Daley brought Chicago its Gay and Lesbian Hall of Fame and, later, the annual military salute to LGBT veterans (still the country's only government-sponsored projects of these kind). In 2004, he publicly stated his support for marriage equality and helped lobby for the passage of the state's civil union bill in 2009.

These accomplishments are especially noteworthy considering Daley did not start out on the best foot with queer Chicago. After he took office in 1989, he was vilified by many gay activists, many associated with the city's vocal ACT UP chapter, over what they perceived to be a slow response to the HIV/AIDS epidemic in the city. In late 1989, he abruptly stormed out of a meeting with gay community leaders.

ChicagoPride.com checked in with a few of the city's leading LGBT advocates for their thoughts on our soon-to-be former mayor's legacy.

According to William Greaves, director of the city's Advisory Council on Lesbian, Gay, Bisexual and Transgender Issues since 2000, Chicago has become "the best city in the country to live in if you're LGBT," largely thanks to Mayor Daley's leadership. He described his working under the mayor as "an enormous honor and education."

Chief among his favorite memories of Daley are his "strong, personal support" for marriage equality and unfailing support for Lakeview's Center on Halsted.

"He has always been willing to learn about our community," Greaves said, acknowledging the initially tense relationship between Daley and gay activists. "He may not have understood it completely at the beginning, but as he learned more he became supportive. He has brought our community forward in so many different ways."

Daley told ChicagoPride.com, "Equality is an American virtue, that's why I was happy to become one of the first national civic leaders to embrace same-sex marriage, support domestic partner benefits and expand the City's Human Rights Ordinance to include ‘gender identity.' It was important to ensure the LGBT community felt at home and that's why I designated North Halsted Street an official neighborhood, I supported the Center on Halsted and appointed the first openly gay member of the Chicago City Council."

Rick Garcia, Equality Illinois founder and long-time Chicago gay activist was often one of those who challenged Daley and his response to the apex of the AIDS epidemic in Chicago. But today, he described the outgoing mayor as "an extremely hard act to follow" in terms of his relationship with the city's queer communities. Garcia traced Daley's progressiveness back to when he served as the Cook County State's Attorney and appointed a liaison to the gay community, a rare move for elected officials at that time.

That said, Garcia was also a handful of activists who "screamed at him and screamed at him" and were arrested, alongside activists like the late Danny Sotomayor and Billy McMillan in a demonstration that took place in Daley's office early in the mayor's tenure.

As activists got to know him, however, and AIDS funding was ultimately increased, Garcia said he ultimately became "the best mayor in the country for the LGBT community." He recalled an interaction with Daley about the civil unions bill when the mayor pulled Garcia aside in the hallways of the state capitol in Springfield late last year.

"He leaned in toward me and said, 'How close are we to passing the gay rights bill?' and I said, 'Close, but not close enough,'" Garcia recalled. "To that, he said whatever we needed him to do, he would do it and then he looked me dead in the eye and said, 'Rick, if they don't pass it this year, go for marriage. Just go for marriage.' Here I am the gay rights activist and I'm being more moderate than he is."

Garcia also applauded Daley's refusal to appoint a controversial religious figure, Pastor Wilfredo De Jesus, to an aldermanic post in the city's 26th Ward, though he had been the appointee of the previous outgoing alderman. De Jesus held a number of anti-gay positions.

When Garcia spoke with Daley about De Jesus, Garcia says the mayor became teary-eyed. He later appointed Roberto Maldonado, a progressive lawmaker with a strong record on LGBT issues.

"He said it would be an embarrassment to the city and that we couldn't have that," Garcia said.

Julio Rodriguez, life-time Chicago resident and president of ALMA, the Association of Latino Men for Action, added his fondest memories of Daley include meeting the mayor when he was inducted into the Gay & Lesbian Hall of Fame and watching him speak passionately about the community at the opening ceremonies of the city's Gay Games at Wrigley Field in 2006.

"I am very struck by how far he has come in starting to embrace the diversity of the LGBT community," Rodriguez said. "I just remember watching him [at the Gay Games] and that night felt surreal. He was so matter of fact in talking about the LGBT community as one of the most important communities in the city of Chicago."

"I had never imagined in my whole life I would watch the mayor of the city of Chicago do that," he added, "and at that moment it felt like every reason I believed why it would never happen was completely wrong. It made me feel like I'd forgotten what the possibilities for our community were and are."

Daley concluded, "Today, Chicago is a stronger and more vibrant city because of all that we've done together to support the LGBT community over the past two 22 years."

Daley's successor, mayor-elect Rahm Emanuel will be formally sworn in on Monday, May 16, at the Jay Pritzker Pavilion in Millennium Park.