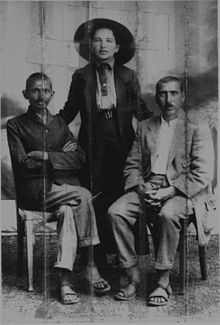 photo credit // wikipedia.org
Lexington, Mass. - An Indian American group has canceled a speech by the author of a new biography on Mahatma Gandhi because of controversial passages in the book that imply he had a gay relationship.

Joseph Lelyveld, a Pulitzer Prize winner and former editor of the New York Times, was scheduled to talk about his new book, "Great Soul: Mahatma Gandhi and His Struggle With India."

The book, released this week in the United States, talks about Gandhi's relationship with German-Jewish architect and bodybuilder Hermann Kallenbach.

In the book, Lelyveld quotes this from a letter Gandhi wrote to Kallenbach: "How completely you have taken possession of my body. This is slavery with a vengeance."

Lelyveld writes that Gandhi left his wife in 1908 to be with Kallenbach. They lived together for a time, and they called each other "soulmates."

Puran Dang, chairman of Indian Americans of Lexington (Mass.), told the Boston Herald that "to avoid any controversy, with all respect to the author ... [the decision to cancel the speech] was jointly taken in the interest of everything being in a peaceful status."

The publisher, Knopf, told the Herald in a statement that the decision was "based on misinformation, not facts. Mr. Lelyveld is a Pulitzer Prize-winning journalist, and it is their organization's great loss that their members will be denied an opportunity to hear him."