Candidate who supports civil unions might jump into GOP race 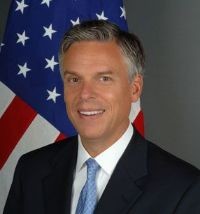 Des Moines, Ia. - A candidate who supports civil unions for gays and lesbians and who's currently working for President Obama might jump into the presidential race as a Republican.

And a "turn-key" political operation is waiting for him if he wants to run for president, according to the Associated Press.

Supporters told the AP that they're just keeping their fingers crossed that Huntsman will jump in.

Huntsman has also served under President Reagan and the first President Bush, so he's got solid Republican credentials there. And he's anti-abortion and pro gun rights, so he'll hit the right notes with other members of the party's base.

But his time working with President Obama might be a problem. In fact, the Associated Press reported that Obama operatives were really patting themselves on the back when they appointed Huntsman as ambassador, since it might've taken him out of running for president, and left a Democratic stain on his resume.