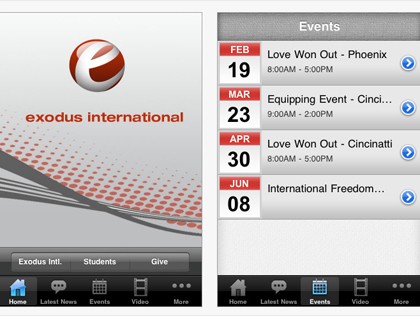 Apple remains under fire for allowing an anti-gay iPhone app from Florida-based Exodus International which encourages people to "cure" themselves of homosexuality.

The "ex-gay" Christian group believes people have a choice to be gay and their app is targeted to "homosexual strugglers" and links users to the ministry's website. The message of the hate app is that homosexuality is a "sin that will make your heart sick" and a "counterfeit."

The non-profit group Truth Wins Out started a petition last week demanding that Apple remove the offending Exodus app, which they claim violates Apple's own software guidelines against an app that is "defamatory, offensive, mean-spirited, or likely to place the targeted individual or group in harms way."

As of Tuesday morning the online petition, which demands that Apple remove the app from the iTunes store, had garnered over 124,000 signatures.

"It is astounding that Apple would allow an app from an organization that promotes gay exorcisms, demonizes LGBT people, and is rejected by every respected mental health association in America," said Truth Wins Out's executive director Wayne Besen.

Medical professionals say "reparative therapy" can be damaging to the self-esteem and mental health of those undergoing the so-called therapy.

Truth Wins Out says the app, targeting LGBT youth, is a "dangerous strategy" in light of the recent wave of LGBT youth suicides.

According to a study published in the Journal of American Academy of Pediatrics, LGBT teens who experienced negative feedback from their family were 8 times more likely to have attempted suicide.

Apple has yet to respond to the petition.