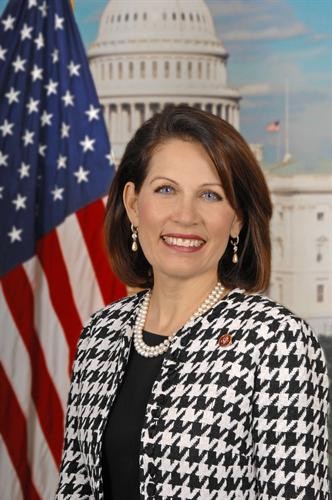 Washington, D.C. - Rep. Michele Bachmann of Minnesota said on Wednesday that she might try to take the Tea Party all the way to the White House.

"We're going to have a deep bench for 2012, I have no doubt, and I think what people are asking for is a bold, strong, constitutional conservative," Bachmann told MinnPost on Wednesday. "And I think that we're going to find out who that person is, but the main focus right now needs to be on the fact that we cannot afford a second term of Barack Obama and that's what I'm going to focus on."

Bachmann, a native of Iowa, will be traveling to Des Moines later this month to give a speech, just as other potential presidential candidates start sniffing around for money and votes.

Bachmann is about as anti-gay as any candidate can be.

She wants state and constitutional amendments that would ban gay marriage and any legal equivalents.

She once said that the LGBT community was after "our children... are the prize for this community, they are specifically targeting our children."

She also has said she has "compassion" for people dealing with "sexual dysfunction and sexual identity disorders."

She is a graduate of Oral Roberts University and owns a Christian counseling clinic.