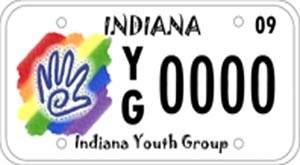 photo credit // indianayouthgroup.org
Indianapolis, IN - A license plate lawsuit from an Indiana gay youth group against the Indiana Bureau of Motor Vehicles has been thrown out.

According to the Indianapolis Star, the American Civil Liberties Union had sued Indiana's BMV in September after the Indiana Youth Group's request for a license plate supporting gay teenagers was twice denied.

The Indianapolis-based group argued the BMV uses arbitrary and unconstitutional standards in the application process. The BMV said it turned down the application because the group failed to show its services have a statewide impact and that the money raised wouldn't be used to pay staff salaries.

THe BMV confirmed the suit has been dismissed, but said terms of the agreement are confidential.

The Indiana Youth Group will apply for the new plate a third time.

The group, which was founded in 1987, says proceeds from the sale of its plate will help support programming for an estimated 3,000 gay, lesbian, bisexual and transgender youths the group serves at its center in Indianapolis and throughout the Hoosier state.