Leaders reflect on the historic civil unions vote in Illinois 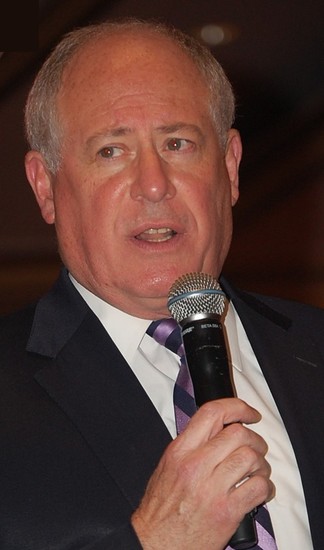 gov. pat quinn addresses the crowd at world of chocolate

photo credit // anthony meade
Chicago, IL - With its historic passage this week of the Illinois Religious Freedom Protection and Civil Union Act (SB 1716) in both the House of Senate this week, Illinois stands on the verge of becoming the twelfth U.S. state or district to grant legal recognition to same-sex relationships via either civil unions or marriage.

As of Friday, the civil unions bill,, granting committed same-sex couples many of the same rights as heterosexual marriages, awaits only confirmation by the heads of the state Senate and House before being passed along to Governor Pat Quinn's desk. Quinn reiterated his intention to sign the bill into law as the featured speaker Thursday evening at the AIDS Foundation of Chicago's World of Chocolate fundraiser at the Hilton's International Ballroom. Quinn on Friday said he expects the bill-signing ceremony, believed to be taking place in Chicago, will take place sometime early next year.

"This week I think we extended and expanded human rights in our State of Illinois," Gov. Quinn said Thursday. "We used the power of democracy and we worked together to make sure that we would have a law in Illinois authorizing civil unions. That law will land on my desk very shortly and I'm going to sign that law."

Speaking with ChicagoPride.com Friday, the bill's chief sponsor, state Rep. Greg Harris, admitted he still hadn't gotten much rest since the legislation was approved by both the state Senate (in a 32-24-1 vote) and House (61-52) earlier in the week. Taking a break from talking to other press and busily writing "thank you" notes to the "so, so many people who gave their heart and soul for this" by contacting their state legislators, speaking with their churches and social groups and taking other actions to push for the bill.

Harris added he remains struck by his colleagues' decorum in Tuesday's vote, where he emotionally urged lawmakers to support the legislation as a "matter of fairness... a matter of respect, a matter of equality."

"For the hour this was being talked about, the chamber sat in silence because of the gravity and importance of what we were talking about," Harris recalled, noting 'chaos' is usually the order of the day on the House floor.

Jacob Meister, founder of The Civil Rights Agenda and former U.S. Senate candidate whose group lobbied heavily for the bill, lauded the leadership of Harris and other perennial proponents on LGBT issues -- including state Reps. Deborah Mell and Sara Feigenholtz -- but also added support from less familiar sources helped push the "yea" votes over the edge.

Meister specifically identified Sens. Rickey Hendon (D-Chicago) and David Koehler (D-Peoria) and Reps. William Black (R-Danville) and Ken Dunkin (D-Chicago) and Naomi Jakobsson (D-Urbana) as "heroes" who risked political backlash to vote in support of the bill. Many of them - particularly Hendon - spoke emotionally for the bill on the House and Senate floors.

"I think people like this don't gain politically from taking the position and some of them will probably get hurt as result of it," Meister said. "We need to let them know how appreciative we are of what they did. They really are the silent heroes."

Equality Illinois public policy director Rick Garcia added the support of Gov. Quinn, along with Senate President John Cullerton and House Speaker Michael Madigan was also key to pushing their vote over the edge. The legislation's passage, he said, sends "a strong message to the rest of the country."

"Here you have a Midwestern legislature acknowledging that gay and lesbian couples should be recognized and protected right here in the heart of the heartland," Garcia said. "This was a very sober-minded, somewhat middle-of-the-road legislature that wanted to make sure their gay and lesbian neighbors were treated fairly and equitably."

But progress on the bill did not happen overnight or without a lot of hard work, he added. His and other groups' robust organizing efforts pushing the importance of members of the community contacting their legislators on the issue were key to its success.

Next on his organization's priority list is ensuring the bill is not challenged or undermined and implemented properly. Equality Illinois is hosting two community forums on civil unions -- one in Belleville, Ill. and another at the Center on Halsted -- later this month.

Meister added he considers the bill not a resting stop, and hoped the community would continue to push for marriage equality.

Meister's position is one shared by Mayor Daley who told the Sun-Times, while he applauded the General Assembly's recognition that gays and lesbians "should have the same rights under state law," he urged the state to "move faster" toward legalizing gay marriage.

"[E]ventually, [gay] marriage will take place. It has to. . .," Daley said. "These are great citizens. They're a tremendous resource for us in our great city. I'm very proud of the relationship that I had with them over many years. And it's really important for us to move forward. These are people [who] have families. These are people [who] work in every sector of our society. They should not be discriminated against in any way whatsoever."

Legal recognition of same-sex relationships is an issue likely to play a role in the race to elect Daley's successor as candidate Rev. James Meeks was both the only Democratic Senator -- and the only black legislator in either chamber -- to vote against the bill. Meeks defended his vote in a Sun-Times interview as representative of his belief in "the sanctity of marriage."

Expectedly, the Catholic Conference of Illinois and the Illinois Family Institute (IFI), both of whom lobbied heavily against the bill, decried its passage in news releases this week.