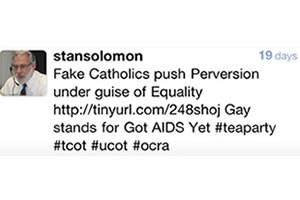 Solomon resigned Tuesday without commenting on the controversy, the AP reported.

The tweets first came to light on Monday, when Bil Browning of gay website The Bilerico Project published screenshots of Solomon's Twitter feed.

"Fake Catholics push Perversion under guise of Equality," he wrote in one tweet linking to a story about newly formed pro-gay group Catholics For Equality. "GAY stands for Got AIDS Yet."

In other messages he disparaged Muslims and African Americans (both Scott and his Democratic challenger, Rep. Andre Carson, are black.)

"I didn't know anything about it," Scott said. "I don't know Twitter from litter."

Scott, who won his party's nomination with the support of the tea party and over the objection of the local Republican Party, said Solomon was an unpaid volunteer.

"When you have volunteers, they come with all different axes to grind," he said.

But Scott also objects to gay rights and has said that Islam "advocates the eventual elimination of all Christians and Jews."

In other posts, Solomon wrote "U should not allow queers around kids," "Homosexuality is wrong & dangerous to everyone" and "Filthy Queer."