I DO: Jenn Maberto & Edgard Wood marry, surrounded by hundreds from the LGBTQ community 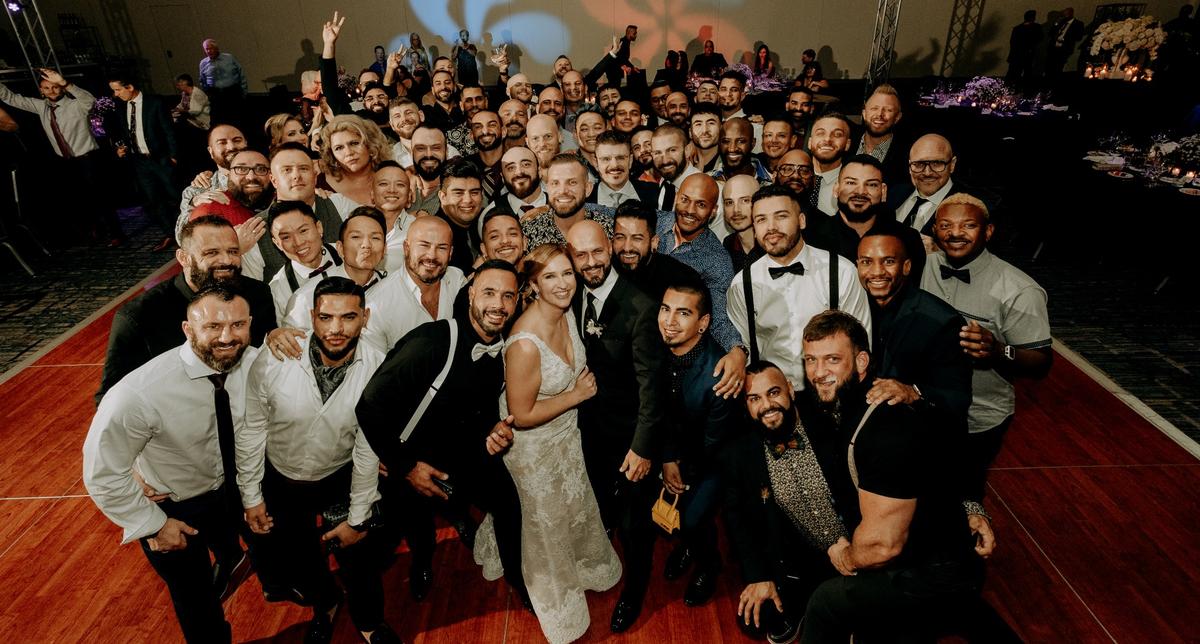 photo credit // provided
Jenn Maberto and Edgard Wood were married on Saturday, Sept. 17 in Chicago, an event that resonated through and was celebrated by the city’s LGBTQ community and beyond.

They had a ceremony and reception downtown with family, friends, and an overflow of their “chosen family,” they said with pride of the abundance of loving gay supporters. They also celebrated the following day at Fantasy Nightclub in the Lakeview neighborhood often called Boystown – at the Luxuria Productions’ Tea Dance, “so we could include and celebrate with even more of our friends from the LGBT community,” they said. “We have a lot of friends who we wished we could have included (at) the wedding, so the tea dance was a way we were able to include everyone.”

Maberto, 34, is a senior engineer for ComEd. She is originally from Indianapolis and has called Chicago home for 11 years. DJ Ed Wood, as many know him, is originally from Puerto Rico and has lived locally for close to two years. He also works as a marketing advisor and independent contractor.

They live in the Buena Park neighborhood.

“More than 20 years ago I started playing exclusively in gay clubs, making many friends, getting involved and understanding how difficult it is to gain acceptance from this community in a world that did not understand it. Since then, this community has become my life and where I most feel at home,” Wood said.

Maberto went to Purdue University, where she made a lot of friends in the LGBTQ community. When she moved to Chicago, many of her gay college friends also relocated to Chicago, including her roommate who she lived with for her first six years in Chicago. “The LGBT community is very good at networking, so the longer I was here, the more people I got to know. I then met friends here who I started traveling more with and through that have met even more members of the LGBT community throughout the country and the world.”

Their wedding had about 200 attendees, and about 75 percent of them were from the LGBTQ community. There were about 300 at the tea dance. And half of their 10-person wedding party were LGBTQ.

“For both of us, this is the community we grew into and at this point, (it) is all we know,” Maberto said. “I have grown to be more comfortable in my own skin, (thanks to the LGBT community). I used to have thoughts/feelings of if I belonged or not, but then the more people I met, the more I realized that that is a common feeling among everyone. The LGBT community just wants to love and be loved and with that I have found my chosen family.

“Within the Chicago LGBT community there is a lot of love and support that you don’t find as much in other cities.”

Wood added: “We both try to be happy as much as possible and love making others happy. It makes us happy that we have the support we do and that we can make others happy in the process.”

Chicago’s LGBTQ community played a magical role behind-the-scenes for their memorable day. Roberto Gonzalez did their floral decorations; Juan Jose Herrara and Travis Kimpel did hair; Alex Lagos did makeup; and Alex Cabot was the DJ, she said. “Plus, all of our friends came dressed on point and fierce, making everything even more beautiful,” he said.

“At the end of the day, it’s important to be yourself and love yourself,” Maberto said. “Once you accept yourself, you will attract others who also will accept you. For me, I never really thought I would find a partner and get married, but I had a group of close friends who allowed me to be me, and I just tried to enjoy life as much as possible. To love someone else you must love and accept yourself first and then if/when you find someone who is doing the same, it becomes easy.”

Wood added, “It’s the law of attraction: when you try to have a positive outlook and are loving, you will attract others with your same vibe and love.”

The Meeting: “We met (in) August 2020 in Atlanta. I was there with one of my good friends who was DJing an LGBT party and Ed was there to DJ another LGBT event that same weekend. I had heard of Ed before, but even though we have a lot of mutual friends and had attended the same events at the same time previously, it wasn’t until then that we met,” Maberto said.

The First Date: “There wasn’t really a ‘First Date.’ We met and hung out with friends that first weekend. I told him I was going back to Atlanta a month later with friends for Atlanta Pride and he decided to come, too. He seemed like a nice guy, but I still didn’t think too much of it. Then a few weeks after that, he traveled to visit me here in Chicago and that gave us a chance to really start to get to know each other one on one,” Maberto said. Wood added, with a laugh, “Jenn kind of ignored me at first, but I didn’t give up.”

The Proposal: “I wanted to find the perfect place to propose and knew I wanted to do something big, but I was struggling to find a good place to do (it). Since Atlanta was the place of a lot of our firsts, I proposed during Atlanta Pride in October 2021 at a friend’s house where we were surrounded by a lot of our close friends from the LGBT community and some new friends,” Wood said.

The Quote: We must accept ourselves as the human beings that we are, even more so within the LGBT community, which often stigmatized. At the end of the day, I am simply a human being who wants to live surrounded by other human beings and enjoy life to the fullest,” Wood said.