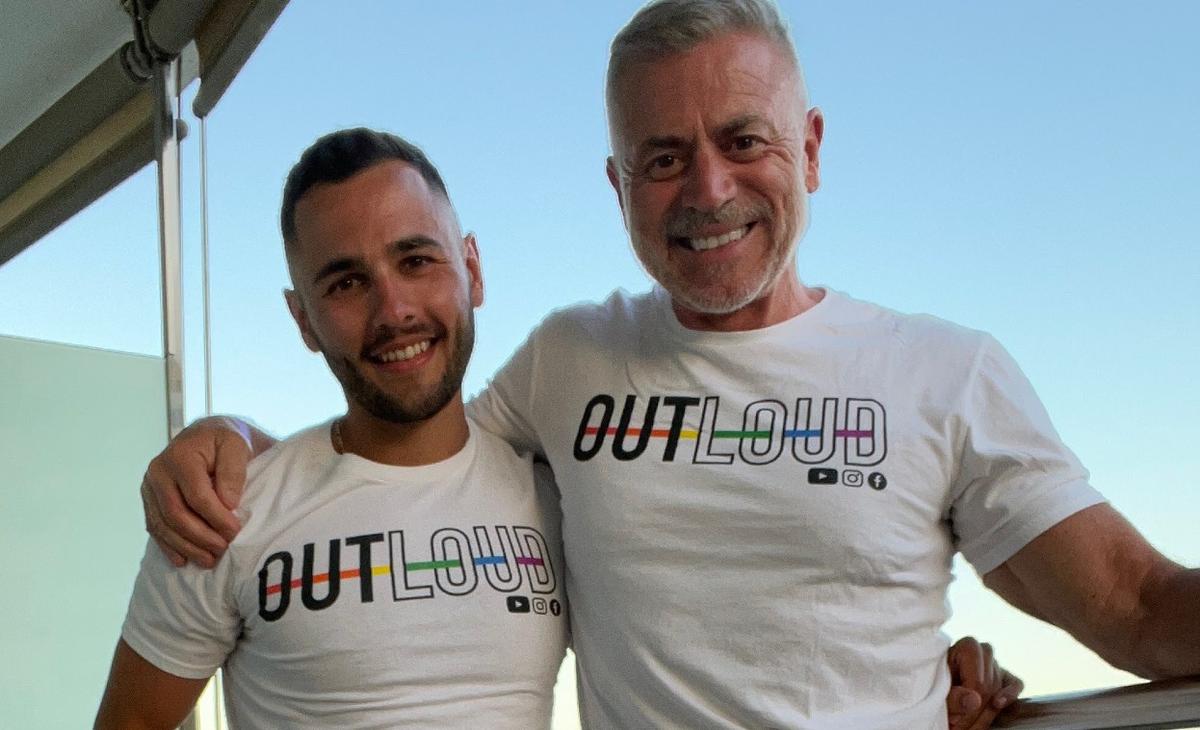 Dating for four years, McKinney & Merrill talk about their age-gap relationship, the Gay Softball World Series and a 2023 adventure weekend for their YouTube subscribers

Jon McKinney was moving to Rhode Island from Jonestown, a small town just outside of Hershey, Pennsylvania. About six months before he was scheduled to move, he went to Providence with his mom to find an apartment.

Brian Merrill owned one of the apartments.

McKinney was immediately smitten – for the realtor, not the real estate.

“I told my mom that, if she wasn’t with me, I would have made a move right there,” McKinney said.

“What stood out most to me was how polite and genuinely nice this guy was. Little did I know our paths would cross a couple of years later,” Merrill said.

They bumped into each other at the gym and started working out together, and often went out to breakfast and their friendship grew. Both were in relationships, “so the thought of dating wasn’t top-of-mind,” McKinney said. “When we both realized there was a lot of chemistry, things naturally took off.”

As of this past August, McKinney and Merrill have been together four years and the world has, it seems, followed their every move over the past two years.

McKinney, 28, is a physician assistant who, shortly before starting physician assistant school, got the idea to launch a YouTube channel. “I felt I could connect with more people through the Internet than I ever could in a clinic or hospital,” he said. “The best part was that this channel would be geared to the LGBTQ+ population and I could focus on improving the health of my viewers and my community.

“Our overarching goal of creating videos centers around promoting this notion/idea of living Out Loud. It encourages everyone to be the most authentic version of themselves in a mindful way. Brian and I share our lives in these videos: we talk about how our families reacted to our relationship; we create travel videos; I do educational medical content and Brian talked about his fitness and weight-loss journey.

“Making videos for YouTube should serve a purpose to the viewer. Sure, we want to entertain, but that’s not all. We want the viewer to walk away from these videos a healthier version of themselves, hopefully with a smile or pity laugh at Jon’s terrible dad-jokes.”

They have made more than 210 videos, with one or two new videos released every week.

“I look at some of my older content and cringe. I didn’t have much video-editing or production training, so the overall production value has come a long way in two years,” McKinney said.

This past June, the two traveled to Spain, with backstage passes to the Sitges Pride Festival. They filmed the entire journey, interviewed performers, and created an entertaining project – with more than 100,000 views on YouTube.

“In a perfect world, these videos could reach hundreds of thousands of people and really impact their lives. It would be great to have the opportunity to focus on YouTube full-time and create content for the LGBTQ+ population that encourages health and general happiness,” McKinney said. “We’ve received so many positive messages about how our videos have changed people’s lives, how they now view their own age-gap relationship differently, or how we helped a closeted man finally come out and live his true life. Our subscribers blow us away, and that feeling is so rewarding, so addicting. We want more of that.”

Merrill is an associate creative director at Staples.

“Our message is to live Out Loud, and in that message is the promise of authenticity. We enjoy sharing our lives with our viewers,” McKinney said.

Merrill added, “I’m amazed and surprised that people want to watch our crazy, and sometimes boring, lives. And 99.9 percent of the comments we receive are awesome and supportive.

“I hope we come across as real and genuine, (people who) you’d like to hang out with.”

The most popular Out Loud video was one of their early videos about how they met. They’re shown sitting on a couch in the living room talking about how they met while McKinney was house hunting. “We go back and forth discussing the serendipity of our coming together. It’s such a simple video, but it is our best-performing video. I think that’s because we’re just being open and honest about such an awesome moment in our history together,” McKinney said.

McKinney said his favorite video is entitled, “How we can end HIV/AIDS,” in which he discusses the use of PrEP and other public health issues. The video is a look back in time at the HIV/AIDS epidemic and culminates with a discussion on options for PrEP. The video delivered for its educational and entertainment value, McKinney said.

Merrill favors the videos that carry a competitive angle, such as, the Age Gap Guessing Game, or, How Well Do You Know Your Boyfriend.

Their Out Loud page on YouTube has close to 20,000 subscribers.

“It’s really humbling that so many people care enough to subscribe and want to see what we’re going to do next,” Merrill said. “I would love for us to eventually be the go-to couple for advice, tips, entertainment and information.”

McKinney acknowledged that the LGBTQ community has not always been treated with respect by other communities, including healthcare. “I was inspired to share videos about our authentic life and show viewers that people in healthcare are allies. There were a group of videos by Davey Wavey that really got me inspired to make gay health videos,” he said. “I loved how he discussed sexual health topics in a more modern way, a way you wouldn’t hear in your high school sex-education class. Now, our inspiration is drawn from all the viewers who enjoy our content. If we can make them laugh and provide a little education, then we’ve done our job.”

With a worldwide platform and a continually growing fan base, McKinney and Merrill are taking the next step: the first-ever Out Loud Key West Adventure Weekend for their YouTube subscribers is planned for next September at Alexander’s Guesthouse in Key West, Florida.

“We have reserved the entire guest house for our subscribers,” McKinney said. “With this event, we’ll get to share a fun and memorable weekend with a bunch of wonderful people who watch our videos. We have a whole schedule of events planned, including a gay pool party, sunset cruise, gay bingo, and more.”

Their relationship is rooted in love, not around the age-gap.

“We became best friends before we dated,” McKinney said. “I think I am still more aware of the gap than Brian. I wish I could package him into a younger version of himself just so I knew we had more time together. For this reason, we take every opportunity to go on adventures together. Whether it’s traveling somewhere new, cooking a new dinner, trying a new skill, or meeting new people, we are constantly putting ourselves into situations, as a couple, to bond over shared experiences.”

Merrill jokes that, yes, he “may be a couple of years older” than McKinney, “but I’m healthy and have lived a healthy lifestyle most of my life. I plan on being around for a while. We keep our relationship strong through communication. I can honestly say, we have never had a fight in the 4-plus years we’ve been together. Talking, planning, bending and compromising … it’s all part of our relationship.”

Both played in the 2022 Gay Softball World Series – on different teams. They did, though, have a bet on which team would do better in the Series – and the loser had to shave off his beard.

Of course, the shaving was shown on video.

“Instantly he looked 10 years younger,” McKinney said. “Had we dyed his naturally silver hair to brown, we’d shave 20 years off the clock.”

McKinney admitted that when he was coming out as a teenager, it was more difficult for him to share the age of his partner than the gender of his partner. “I’ve always been attracted to the older ‘silver daddy’ look; it’s sort of my thing. I own it now, but I hid my relationships up until my senior year of college.”

Merrill said he never thought much of the age gap. His last relationship was also his longest, and his ex was 16 years younger.

McKinney played in the Gay Softball World Series for the Boston Platinum (C-Division), while Merrill played on the Master’s Division D Rhode Island Rockers. McKinney was an offensive powerhouse, helping his team finish 9th of 61 teams. Merrill’s team finished 23rd out of 46. This was the third time each has played in the annual softball showcase that drew 250 teams from across North America to Dallas for five days of games.

“The sheer scale of the Gay Softball World Series is unreal,” McKinney said. “To see that many gay athletes makes me so happy. I thought I was all alone as a college baseball player – I didn’t see any other gay athletes out there and felt conflicted as a gay man. The Gay Softball World Series is a magical place and I’ve met so many lifelong friends there."

Merrill added, “I loved my World Series team: athletic, sweet, fun and talented men and women. It’s truly a bonding experience for me. I really enjoy playing and hope to be doing so for the next few years. When it’s not fun, that’s when it’s time to hang up the jockstrap.”M

McKinney grew up playing multiple sports: baseball, soccer, gymnastics and more. Baseball was his favorite; he exceled at that sport and was a catcher at McDaniel College.

“It was very important for me to find a college where I could play baseball,” McKinney said. “I played in those summer leagues where you travel a lot and play in front of scouts. It was an exciting time and I love those memories of playing baseball all day. I played particularly well in one of the tournaments, which got the attention of some college scouts.

“My team had a really great group of guys, and my graduating class in particular, was very close.”

McKinney came out to his family during his sophomore year, but he wasn’t out to his team and others until his senior year.

“Everyone on the team took it well. There were a couple of weird encounters, and I could tell that some people were a bit uncomfortable,” McKinney said. “At the end of the day, it made me happier to be out and not hide that part of my life anymore. My best friend on the team, Ben, even commented how different I seemed after I came out.”

So it’s no surprise McKinney and Merrill now live their lives, both personally and professionally, Out Loud.

For more information about the 2023 Out Loud Key West Adventure Weekend at Alexander’s Guesthouse, which will be held next September, click here. Or, you can email the Jon and Brian at OutLoudJB@gmail.com for more information.