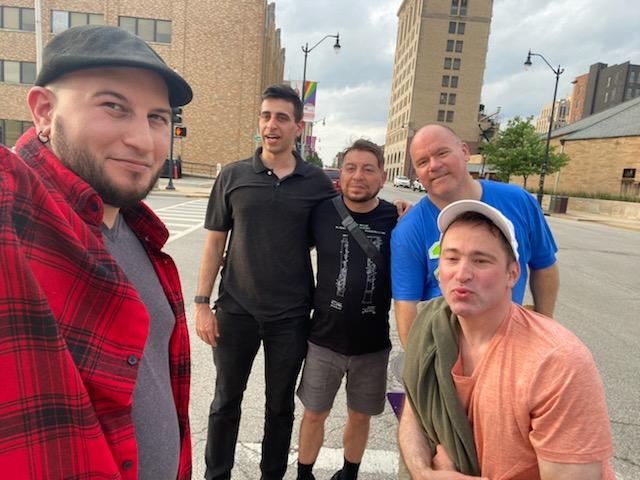 Bisexual Queer Alliance Chicago, one of the only bisexual organizations in the Greater Chicago Area, took to Springfield, Ill. to help kick off the Pride season with the city's PrideFest on Saturday, May 21.

The event was held despite rain in Downtown Springfield within sight of the Governor's Mansion and the Lincoln Home National Historic Site.

BQAC was among over 70 vendors along the PrideFest venue. Other vendors included State of Illinois entities who might in future, under a conservative Republican governor, might not be able to participate.

Springfield Pride Fest is organized by Phoenix Center, the premier LGBTQ community network for the Central Illinois region. It was founded in 2001 as a non-profit and purchased a house to serve as its home in 2005.

The organization held its inaugural PrideFest in 2011 and has been held on the third Saturday of May since then.

Mentjes, a board president, met with BQAC members the night before PrideFest.

One of the few Chicago-based sponsors at the event, BQAC has been vigorously impressing its presence in the larger LGBTQ community. It has often been victim to slights and offenses within the larger community because of misunderstanding and intolerance.

Even at Springfield PrideFest as people pass the BQAC presence, there were occasional comments that bisexuality is "not real" and dismiss it.

BQAC president Auggie Rodriguez, vice president Hugo Escobar, treasurer Asheer Ashraf, secretary and co-founder Mikey Oboza, made the three hour drive to Springfield to take part in the celebrations and advocate for bisexual persons and bisexual contributions to the larger LGBTQ cause. It was a first for the organization.

One of the first to approach BQAC at PrideFest, a family-based event, were from Chatham, Ill.

They expressed that they almost didn't come due to the inclement weather but ended up enjoying it. They also said they were happy to see "BQAC make the trek from Chicago" to promote "community."

BQAC said it was there to offer a "safe intersectional space for people to share their stories and express their sense of pride" and to be a place for "mindful listening and sharing community resources" while fundraising for future advocacy projects.

Some of the stories BQAC heard at their booth included an asexual youth expressing trying to find a place in the larger community, the parent of a pansexual child, people first coming out and excited to come to a Pride celebration for the first time, and also others who just wanted to check Pride out.

Oboza, who helped establish BQAC with the late Ed Negron on October 16, 2010, was known to have carried the bisexual flag at events and campaigns across Illinois from 1999 to the present-day. He was also one of the most well-known bisexual speakers at rallies, especially during the height of the marriage equality legislative fight in Springfield.

BQAC has been cited by San Francisco's Bisexual Invisibility: Impacts and Recommendations report by the Chicago Commission on Human Relations' Advisory Council on LGBT Issues.

It became a 501(c)3 non-profit in 2013 and contributed to MAP's Invisible Majority Report on bisexual disparities. It has partnered in this project with fellow bisexual organizations: Bisexual Organizing Project of Minnesota, Bi Resource Center of Boston, Los Angeles Bi Task Force, and BiNetUSA.