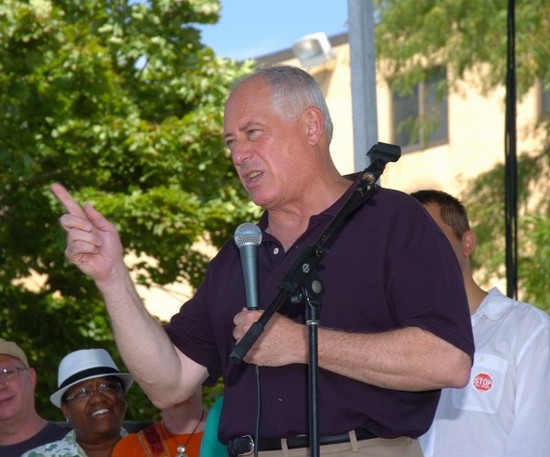 "This is the Land of Lincoln where you treat everyone equal without discrimination," Quinn told the crowd of nearly 200 gathered at the Addison Street festival stage in Chicago's Lakeview neighborhood.

"I think this is one of the most important elections ever, because the choices for our community are markedly different. We have a guy who opposed fairness and equality and a guy who spent his entire career standing up for all Illinoisans," public policy director for Equality Illinois, Rick Garcia told ChicagoPride.com. "He [Quinn] wins or we better forget about any decency or fairness for the next four years."

Brady, a former real estate developer from downstate Bloomington, Illinois, not only opposes same-sex marriage and civil unions, but he favors an amendment to the Illinois constitution banning equal marriage rights for LGBT citizens. Brady has said he would veto any civil union legislation.

"Stop this guy, he is dangerous," state Rep. Sara Feigenholtz (D-Chicago) said from the stage. "He [Brady] will hurt this community."

"I favor civil unions," Quinn told reporters after the short public appearance. "We have legislation in Illinois very close to passage. I believe we can pass that this year."

Last year a house bill to allow civil unions in Illinois was successfully voted out of committee, but never came up for a full vote. Equality Illinois has renewed the push and remains optimistic that the bill can get enough votes to succeed - if Quinn is elected.

With Sunday's endorsement and public appearance in Chicago's gay neighborhood, Quinn is hoping to drive up support from his base in the city which includes the LGBT community. This was evident as Garcia encouraged the crowd, made up primarily of the LGBT community and allies, to register and vote in November.

The Green Party's Rich Whitney, who also is running for governor, has said he supports full marriage equality.

The Illinois general election is Nov. 2.