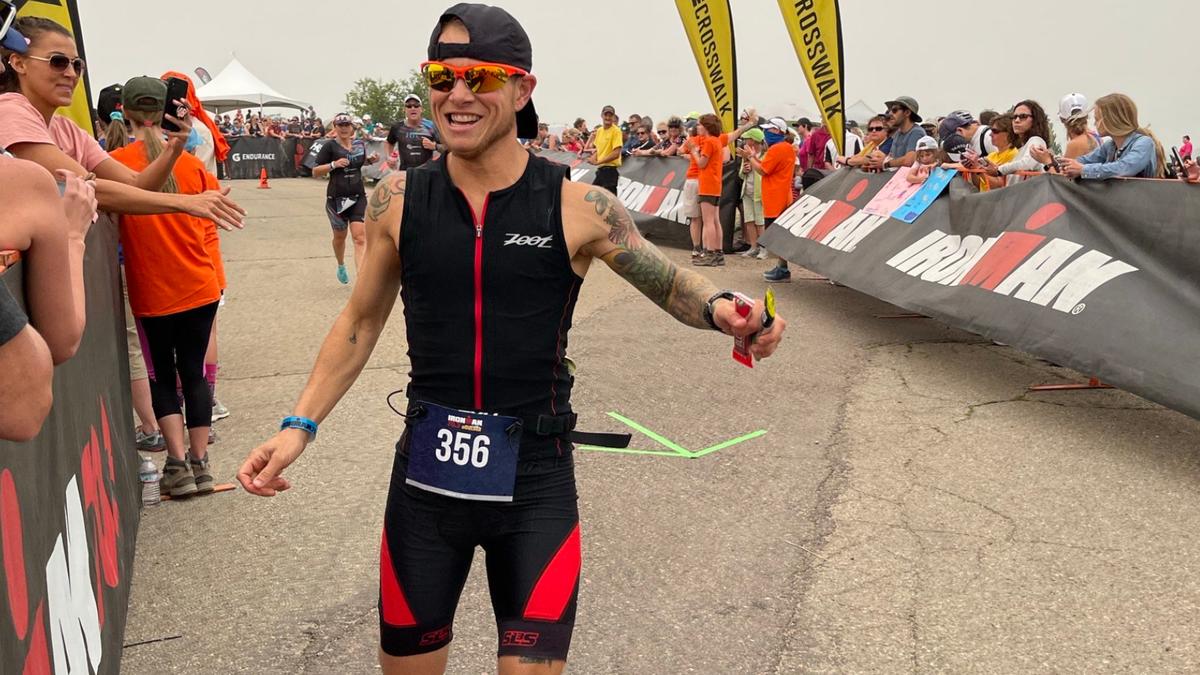 Kamden Romano continues to add to his impressive, successful sporting career, further proving that personal obstacles have never stopped his path to athletic gold and glory.

On Saturday, Sept. 25, in Chattanooga, Tenn., as Romano approached the finish-line, the announcer barked: Kamden Romano, YOU ARE an Ironman.

It was just another memorable athletic moment for the Chicago-area resident, 35, who works as a full-time shopper for Instacart.

“I was really excited and nervous at the same time. I had no idea what to expect,” Romano said of the annual Ironman Chattanooga, where he would swim, ride a bicycle and run for hours. “I just wanted to finish since it was my first (Ironman) experience – a 144.6-mile race. I hope to inspire all deaf and LGBTQ communities that nothing can stop them from pursuing their dreams.”

Romano has long been a sporting role-model, even before transitioning four years ago. Just consider his sporting resume:

*Was among the top 5 in the nation for most soccer goals scored in 2005 (at Harper College).

*Was a gold medal-winner in the World Cup in 2012 for the U.S. Deaf Women's National Team.

*Played for the D.C. Divas in 2006, when the women's football team compiled an 11-0 record, including a women's football record by pitching eight consecutive non-forfeit shutouts in the span of three months, en route to a win in 2006 NWFA championship game in Pittsburgh.

“This is my lifestyle. This is just who I am: a deaf trans athlete,” Romano said. “I just enjoy running, biking and swimming because it's the best therapy. It helps with my mental and health well-being.”

“I never thought I would ever do one, but my mom convinced me to do (a) team relay with her. We did the Muncie 70.3 Ironman, (with shorter distances) in June 2016 and I enjoyed it,” Romano said. “It's nice to have three different sports to train for at the same time. Every day I can switch up, so it's never the same every day.”

Romano first ran a 5K race, then to a marathon, and now an Ironman.

Running a marathon just wasn't enough, though, he said.

“I love challenges and I'm a very goal-orientated athlete; I love to aim higher. I will keep going higher and higher. Also, I'm addicted to that adrenaline feeling after completing races,” said Romano, who started training for the Ironman in January 2020 and then registered for the event last September.

He went the self-coaching route.

“I made my own training plan,” he said. “(Due to the pandemic), all of my races moved to 2021, but I kept training because I knew if I stopped it would be harder to get back into it. My training has been amazing and I'm just so proud of myself for sticking with it. My motivation and my focus were good. I just love what I am doing, and it always makes me feel good about myself.”

Running is Romano's strength, as he's been competing in running races since 2010.

Swimming is his biggest challenge, especially since he never had swimming lessons.

“I just jumped in the pool and started swimming on my own,” he said. “I met an awesome group at the gym right before the (pandemic started) and they invited me to join their swim (group) a few times before the gym closed. I'm glad I stayed with them after the pool reopened. My swimming has improved so much since I started swimming with them.”

All toll, Romano racked up more than more than 635 hours of training in all three disciplines (swim, bike and run) for a total of about 6,900 miles over 21 months.

“My training became my full-time job,” he said. “I'm grateful that I work for Instacart because it has flexible hours, so I could work around my training schedule.

“Training is time-consuming … it's not like I can get up and go, but I am constantly planning my work-out every week, planning the routes, planning my nutrition, checking the weather, and making sure my wheels are pumped, etc. It can be fun, but stressful too.

“But it became my lifestyle.”

Romano said being deaf didn't deter him from the Ironman as the only challenge he had was not hearing the cars behind him during long, solo training rides. He uses his Garmin Varia Radar Taillight, which notifies him when vehicles are behind him, thus giving him peace of mind, he said.

Romano had an interpreter for athlete briefings, plus a different color swim cap (orange) signifying he is deaf, and a deaf athlete bib to wear on the bike.

Romano was determined to complete the Ironman “as my true self,” so as soon as he recovered from top surgery, he started training for a smaller Ironman in June 2019.

Romano is competing in Goofy's Race and a Half Challenge Jan. 8-9, running a half marathon (13.1 miles) on that Saturday, then a full marathon (26.2) the next day.

“I still have more goals that I want to accomplish. I want to qualify for the Boston marathon someday. I'd like to become an Ultra runner as well (run a) 50-mile and 100K (event),” Romano said.