Chicago Legends were 'underestimated' by some foes, but finished second at the annual Gay Softball World Series 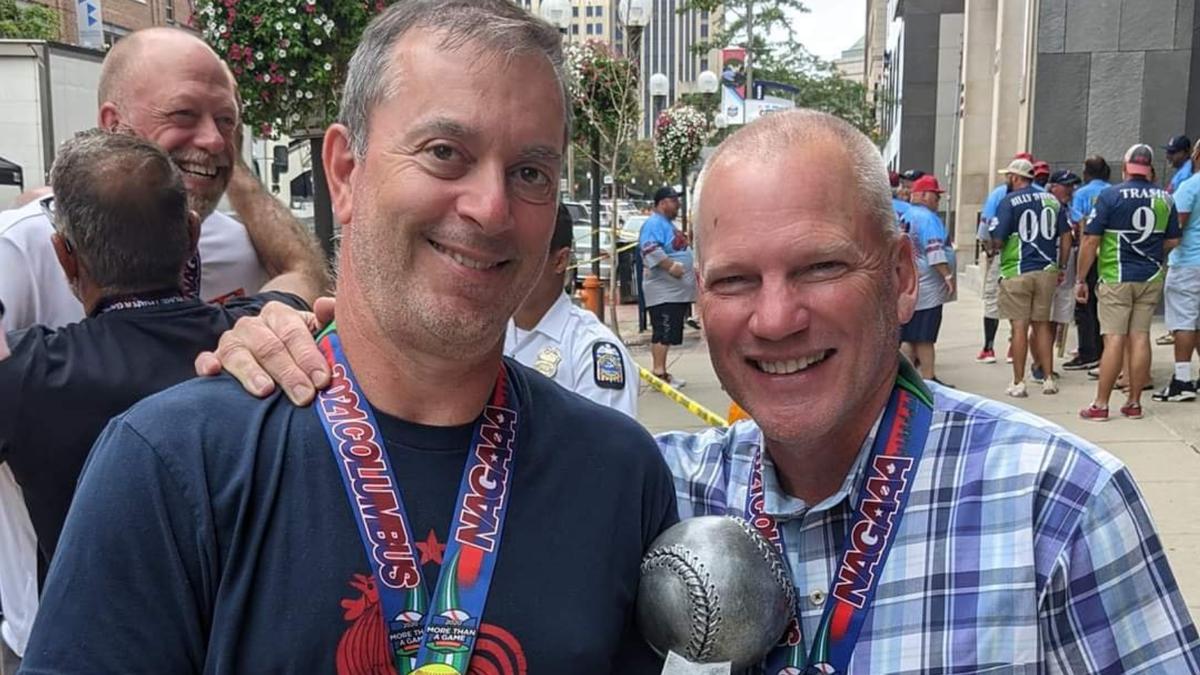 Joe Green, playing in his 25th GSWS, placed for the first time since 1993

The Chicago Legends were the underdog team in the 11-team field of the Master's C-Division at the annual Gay Softball World Series, which ended its 5-day run in Columbus, Ohio on Saturday, September 4.

The team had only 11 players, and 10 of them rated as D-Division players, but, with one C-level player, the Legends were forced to play in the C-Division. And just bringing 11 players was not what coach Joe Green wanted to do, not at all, as softball is played with 10 players. He wanted to have 14 on the roster, minimum, as the possibility of an injury or teammates just needing a rest could have been dealt a lethal blow.

The Legends only had 11.

The Master's Division is for players older than 50. The Legends ranged from 50-64.

And their combined rating was lowest in the C-Division, by a considerable amount compared to some.

Green was, admittedly, not overly confident the Legends would shine. But, “after a few games, we were really gelling as a team, (with) very few errors and a string of hits back-to-back,” he said.

They rode that momentum into the championship game, no doubt surprising others in the yearly softball showcase for gay teams from across North America, perhaps even the Legends themselves.

The Palm Springs Greyhounds were the finals' foe for the Legends, and the crew from California ultimately triumphed in the back-and-forth, high-scoring game.

The Legends were still smiling that Saturday night in Columbus, as they should have been, with their 2nd-place trophy nearby.

The Legends certainly were solid representatives of the city and the Chicago Metropolitan Sports Association (CMSA).

“Everyone brought something to the field,” Green said. “Our passion, energy, and constant encouragement of other players (was nonstop). Everyone contributed and shined.”

Green, 56, who lives in West Ridge, is the owner of Joe Green Team of Keller Williams ONE Chicago. He has been married to Brian Kettner for 6 years and they've been together for 20 years.

This was Green's 25th Gay Softball World Series – and the first time his Series team has placed since 1993 in Philadelphia (2nd-place in the C-Division).

“The stories, the memories, the experiences are what makes the Gay Softball World Series impactful,” Green said. “Having found gay softball in Chicago in 1990, at age 25, allowed me a safe place to play. Knowing I was gay most of my life, there was a sense of fear of being found out to be gay as growing up to be gay was shameful, disgusting, and something you could be arrested for. My dad being in the Air Force working in the MP (military police) division would come home with stories of how they found another gay person in the ranks and how they (were) being dishonorably discharged. I grew up with a fear of being found out. The only sports I participated in high school were individual sports, such as tennis. I didn't want to be a part of a team where I would have been more exposed.”

But through gay softball in Chicago, “I immediately felt connected with the league, the organization, and had an opportunity to meet many other gay people outside of a bar,” Green said. “I know things are different now, and maybe easier to be gay. At the fields and playing the game my personality changes, I'm more open, more vocal, more expressive, I didn't have to hide or hold back, there wasn't that fear. I wasn't the best player, but I was fast and was a smart player.

The Legends had one of their most memorable GSWS games against Houston-Hey Daddy! Also one of their least. The first time they played, Houston won, 18-8.

In the second game, Houston was already leading 10-2 heading into the 3rd inning.

In the bottom of the last inning, the Legends trailed by 5, and still looking for revenge.

“Even though we were chasing them throughout the entire game, the energy around our team was 'we got this,' just keep chipping away,” Green said. “After five consecutive hits, we tied the game to take it into extra innings.”

The Legends ultimately won, with Mike Fabian, the oldest player on the team, going 5-for-5 at the plate and grabbing a key defensive catch in the last inning to prevent runs from scoring.

“It was an honor and pleasure to play (for the Legends). I had an awesome weekend and love the new relationships we made,” said right fielder Renaldo Dixon.

Jeff Milio, who played first base, said the Legends' 2nd-place finish “helped validate who I am as a 50+ gay man. It feels great to know I can still compete and play at a high level and be relevant.”

Matt Levin added: “I found myself buzzing with optimism and enthusiasm all week, even after losing our first two games. There was a palpable resiliency and passion in this team. I fed off it; it drove me forward and empowered me to ignore my sore muscles and aching feet. That's the collective magic we – a team of older men – found in Columbus: the ability to feel young again and experience the unbridled joy of playing softball with people we love. We may have been outsized and out-skilled by the higher-rated slugging teams, but we weren't outsmarted or out-hustled. Nor did we make many errors. A couple breaks here and there, and we may have won the whole thing.”

The slogan for the Columbus Series was “It's more than a game,” which certainly was true for the Legends.