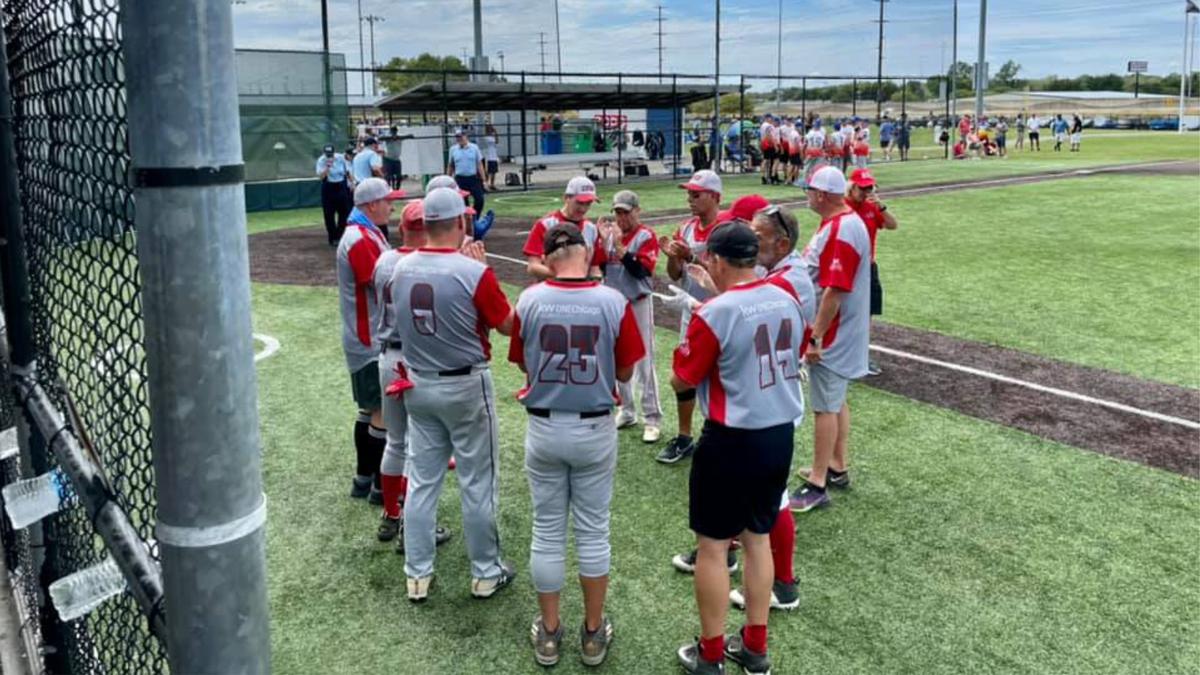 They walked and danced around Columbus, Ohio on Saturday night, September 4, no doubt in a bit of pain – but certainly beaming with pride.

And with a new trophy that was headed back to Chicago.

Chicago's three other teams that competed in the record-setting, multi-day tournament each finished in the top 20 of their divisions. Shade, for instance, was Chicago's D-Division team, among 82 teams in that division, which was a Series record number of teams in one division. The Sidetrack Black Widows played in the 58-team C-Division and the Gotcha Covered Dragons played in the 21-team B-Division.

This year's Gay Softball World Series had 235 teams, including 8 at the top-tiered A-Division, although none from Chicago, and 32 in E-Division, plus two master's divisions, filling seven overall divisions based on skill, or skill-level and age. The Series spanned 933 games over 5 days, played on 24 fields, with 80 umpires from across North America barking “Safe” and “Out” … and 18,000 bottles of water to keep the players hydrated in the summer sun.

More than 3,700 players from 47 leagues in North America, such as the Chicago Metropolitan Sports Association (CMSA), make the Gay Softball World Series the world's largest annual LGBTQ+ sporting event held in one complex.

The event delivers an estimated economic impact for the City of Columbus of $11 million.

“I was thrilled with the way (all four) teams represented our city and CMSA – with class and grace,” said Mark Sakalares, the commissioner for CMSA's Open Sunday Softball League and the Chicago delegate on the North American Gay Amateur Athletic Alliance (NAGAAA) council. The NAGAAA runs the yearly Gay Softball World Series and he also is the chair of athletics for NAGAAA and one of four assistant athletic directors for the Series.

The event was canceled in 2020 due to the pandemic.

Thus, this year's Gay Softball World Series Hall of Fame welcomed two Chicagoans among its honorees: umpire Julie Cowell represented the Class of 2020, and she still was calling balls and strikes at this just-completed Series; along with the posthumous induction of Carl Sharp among the Class of 2021.

Yet it was a Chicago rookie to the Series, Bryan Tucker, playing for the Dragons, who was selected to represent the city. “It was his first time at the Gay Softball World Series and I thought it was fantastic that he got to carry the Chicago city flag during the Opening Ceremony,” Sakalares said. “Seeing his pride as he did that was very cool, very special.”

Sakalares, who was playing in his ninth GSWS, said the 2021 Series ranks “pretty high” – right up there with the Chicago-hosted World Series in 2011. He pitched for the master's division team and helped coach it too.

Chicago lost 17-12 to the Palm Springs Greyhounds in the finals.

“The game went back and forth. We'd score, they'd score,” Sakalares said. “The game was never lopsided. We just got beat by a better team.”

Still, the second-place squad from The Second City was one that all within CMSA could and should be proud of, starting with Green and certainly Jeff Milio, Joe Cappelletti, Jeffry Weber and the rest of the city stars – some of whom have been teammates for 20 years or so. “This was a team filled with huge hearts and immense pride. Everyone played well together. We just had fun, all the time, which is exactly what we wanted to do,” Sakalares said.