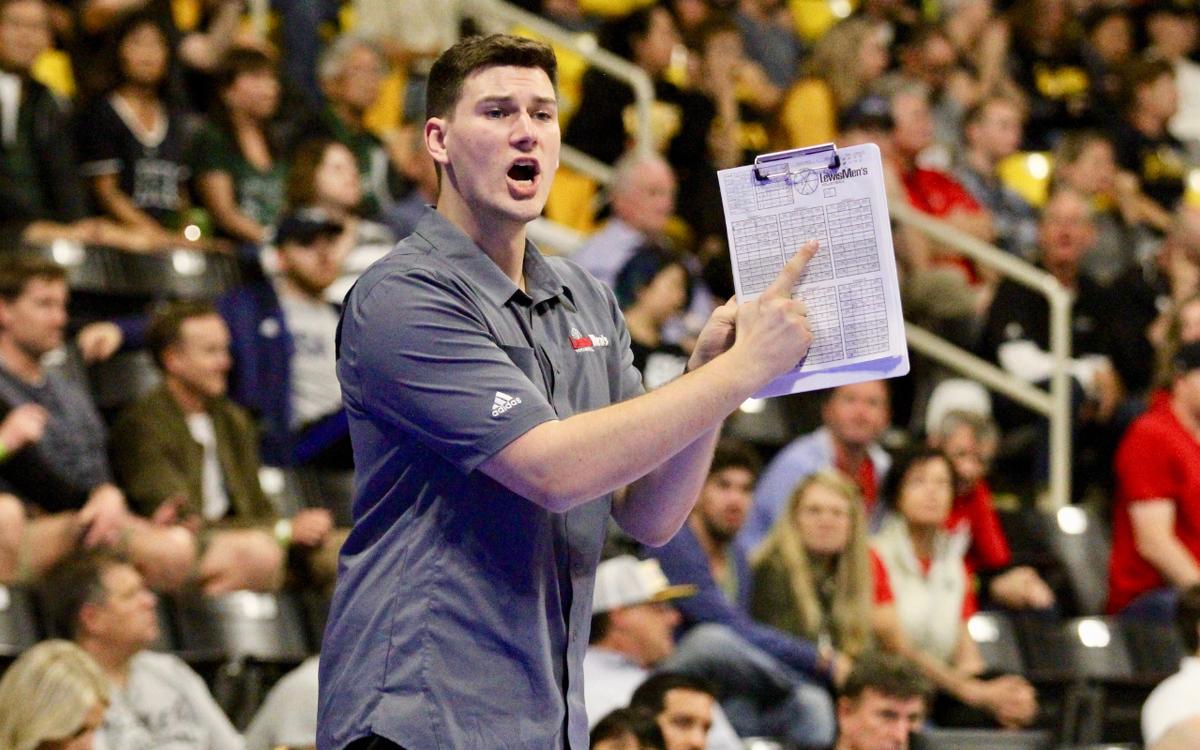 photo credit // galen dodd
Galen Dodd, who has wanted to be a Division I college volleyball coach since he was about 16 years-old, interviewed and was verbally offered the men's volleyball assistant coach job at Loyola University in Chicago in March 2020.

But then the COVID-19 pandemic hit, truly spiking, as they say in his sport, a lot of industries and schools.

Dodd had to find work outside of volleyball, which he did, and instead, he just helped the Ramblers in a volunteer capacity to get his “volleyball fix,” he said.

Dodd, 25, who lives in Chicago's Wrigleyville neighborhood, finally has that same assistant coaching job at Loyola, it was announced, fittingly, in Pride Month. After all, Dodd has been openly gay for 10 years.

“I've had a few people ask how the transition from volunteer to full-time (assistant coach) has been, and it's simple … I am doing the same stuff I was doing; now I just get paid for it,” Dodd said.

“Loyola's season in 2020 was a season of struggles, regardless of the COVID-19 pandemic ending the year early. It was nice to be a part of new growth and setting the future up to be successful,” said Dodd, who has experience as a collegiate coach at USC, UCLA and Lewis.

“I'm excited (for the position). I've had nothing but respect for the Loyola program, both when I was on the West Coast and when I was at a rival conference school. I believe Loyola is a top-tier men's volleyball school.

“I've been lucky enough to be around great mentors and coaches, as well as have success in my short career. It feels like everything is finally culminating right where I am supposed to be.”

Dodd started coaching collegiately while still in college, as a volunteer and student-assistant. He also has extensive experience in club volleyball and within the USA Volleyball system.

His volleyball coaching approach partially comes from … a former NFL player, believe it or not.

Joe Ehrmann – who played in the NFL from 1973-1982, then three seasons in the now-defunct USFL, including the 1983 season with the Chicago Blitz – long provided opportunities for low-income kids in Baltimore. “In his book, InSideOut Coaching: How Sports Can Transform Lives, he talks about transformational versus transactional coaching. Transactional coaching is those who seek to prove something as a coach that they might not have done as a player. I identify more as a transformational coach who works hard to help athletes grow and mature into responsible, respectful young adults,” Dodd said.

Dodd started playing volleyball in middle school and quickly fell in love with the sport, he said. “I was taller than most middle schoolers, so it helped. I played for one of the best clubs in the country and made life-long friends there. In my junior year, we took a silver medal at the U17 Nationals. Unfortunately, when I was 18, I came down in practice and tore the ligaments in my ankle and foot – and I never recovered from it. I ended up having a ligament reconstruction nine months later to fix everything that didn't heal on its own.

“Despite being tall in the normal world, I was not the tallest or most athletic in volleyball. Because of that I had to work harder than other people to learn and see the game at a faster and more advanced level. It's basically what coaches have to do all the time.”

Dodd came out publicly as gay 10 years ago – at age 15 – while living in Los Angeles, telling his story on Outsports.com. He was at the time (and perhaps still) the youngest person to ever tell their story on the popular gay sports site. He was anchored by supportive friends and family, and was glad he did, but admitted he “was not emotionally ready to be fully out at 15 years-old.”

A decade later, he said, “I have no regret coming-out, but I do think I did it for the wrong reason. I saw a chance to come out and be an agent for change but wasn't quite ready to come out. I have no regrets about it, but I came out, then spent the next year or two almost never talking about it. (That) was not the brightest moment in life.

“Volleyball has definitely become more accepting (over the last 10 years, and) I've seen many more openly gay athletes playing. I was recently doing a camp in the Midwest and the boys wanted to play Apple Music's Pride Month Playlist on the stereo. I am happy to see the world becoming more accepting.”

Dodd said he is not the first openly gay coach at Loyola, nor in the Loyola volleyball program. “There are other LGBT staff members in the (athletic) department, and about 10 years ago one of the assistants was also openly gay. I'd like to think that Loyola is a liberal institution, and I haven't had a second thought about my sexuality in the workplace.

“Volleyball and Chicago are both very accepting. I am extremely lucky to be in a community that preaches a world of acceptance. The volleyball community is a very progressive sport with a huge (amateur) volleyball event every year,” run by the North American Gay Volleyball Association (NAGVA), a non-profit committed to promoting and developing the sport of volleyball in the LGBTQ community, with more than 5,000 members in the U.S., Canada, Mexico, and Puerto Rico.

Dodd said he is one of the few openly gay men's college volleyball coaches; there are more on the women's side of the sport. “The pressure I feel isn't about sexuality, but about winning. I (always) want to win; I want to be the best coach I can be,” he said. “I hope that my platform can help advocate and inspire other LGBT athletes and coaches. I am always happy to speak to someone who is struggling with their sexuality and point them in a direction for more support.”

Advice for the young, closeted, questioning or confused student-athletes?

Dodd didn't hesitate: “Don't be afraid to find someone you trust to ask advice. That's what I did before I came out and the coaches I talked to are now some of my best friends. Whether it is a teacher/professor, coach, or an out athlete, there are people more than willing to support you,” he said.

Favorite Movie: Up In The Air